It’s the 30th anniversary of the launch of the Macintosh, and we wondered at Cult of Mac what can we do to celebrate? Then we thought, let’s dissect an original Macintosh and see what made it tick! There’s nothing like destruction in the persuit of knowledge.

In full retro spirit, we asked our friends at iFixit if they would help perform a special anniversary teardown of the 128k Mac. How does our silicon hero compare to modern Macs in terms of components, assembly and ease of repair? Of course being true geeks themselves, they jumped at the chance.

There was only one problem: where to find an original 128k Mac.

Having planned this entire affair at literally the last minute, neither the Cult of Mac HQ nor iFixit Labs had one available. Fortunately as resident Cult of Mac historian and curator of the Vintage Mac Museum (read: Mac pack rat), I have many rooms full of primordial Macintosh components. On a snowy Sunday evening in Boston, I assembled a complete 128k Mac entirely from spare parts, gave it some spit and polish, and shipped it out the next day to California. It was all for the cause.

But don’t worry vintage Mac fans: no working Macinti were harmed in the making of this guide. This 128K had already passed beyond the veil long before its noble sacrifice.

Now without further ado, with photos and commentary from the team at iFixit, Cult of Mac presents the Macintosh 128k Teardown! 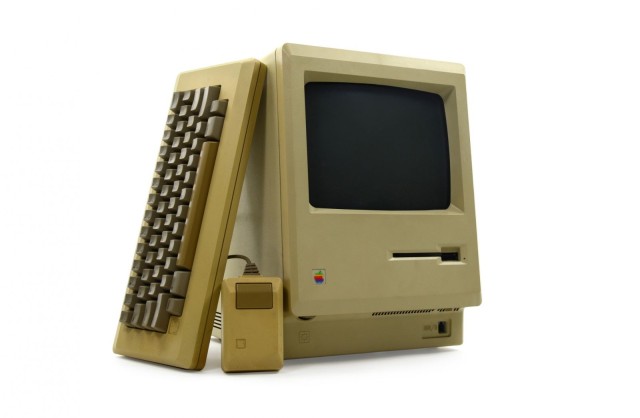 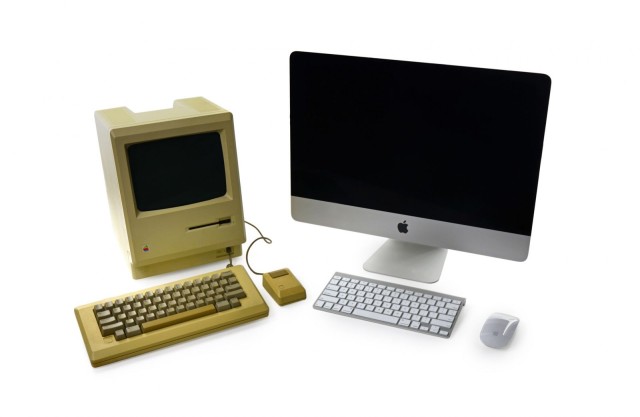 Before we crack open this time capsule (no, not these Time Capsules), let’s take a moment to see just how far we’ve come in three decades.

As Apple works to popularize Thunderbolt, a 20 Gb/s IO interface, let’s reflect back on the original Mac’s high-speed Serial port, supporting (at most) 19.2 kbps.

But hey, at least the AC plug is the same.

And we now have arrow keys! In typical Apple fashion, they ditched the arrows on the original Mac to force people to use the mouse, a strange new accessory at the time.

Cult of Mac adds: This trend-setting streak continues. Apple jettisoned SCSI and serial ports with the release of the first iMac in 1998, hastening the acceptance of USB. Plus ça change, plus c’est la même chose. 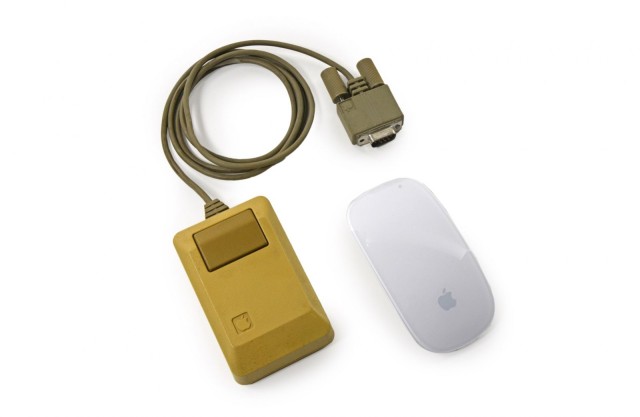 Okay, technically that boxy one is an Apple Mouse II, Model Number M0100. It utilizes a D-subminiature serial connector (DB-9 to be exact). The spacey egg is a Magic Mouse. 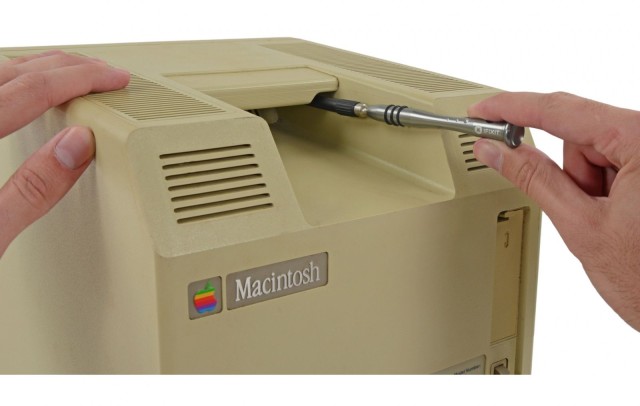 It makes no difference to our Pro Tech Toolkit when this Mac was manufactured—it’s packed with all the tools you need for the repairs of yesterday, today, and tomorrow.

Our flex extension takes on the deeply recessed T15 screws in the case.

True to form, Apple hid a screw; this time, it’s under the clock battery door. No fuss for us, it’s out and we’re spudgering into history.

Cult of Mac adds: Fortunately these early Macs were not glued together—and even had a user-replaceable battery. 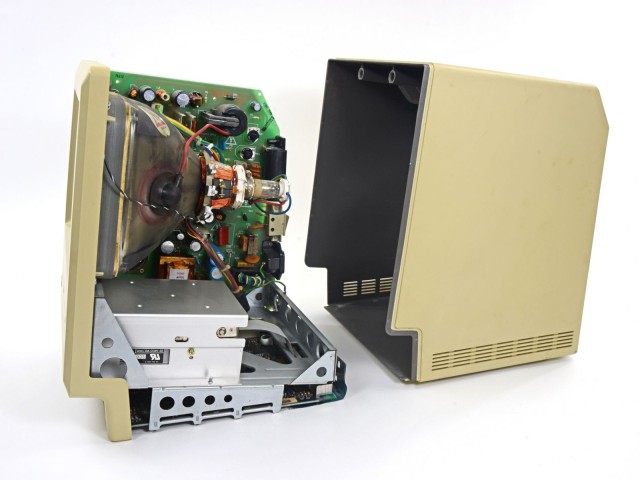 We open the vault and are only slightly disappointed at the lack of cool pneumatic sound effects.

The entire machine slides out of the back case, revealing the power supply, CRT display, 3.5-inch floppy drive, and hiding beneath it all, the logic board. 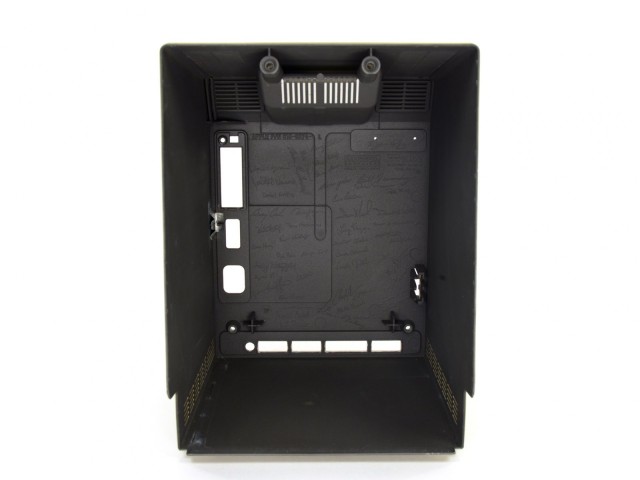 Molded into the inside rear plastic casing are the autographs of Steven Jobs, Woz, Bill Atkinson, Andy Hertzfeld, Bruce Horn, Jef Raskin and the rest of the historic team. 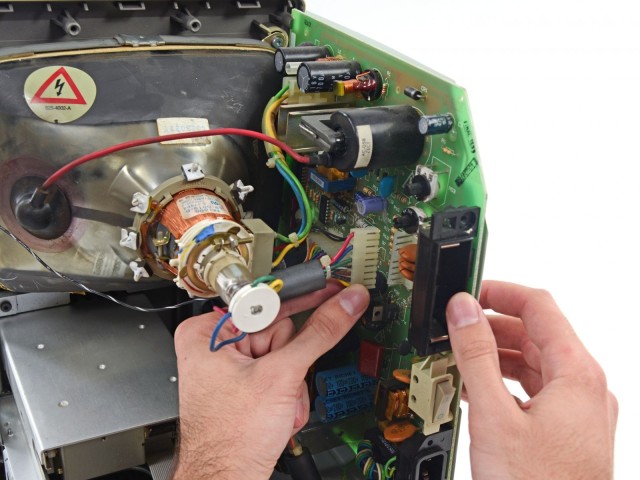 Now that we’re in authorized-service-personnel-only land, we found a few calibration potentiometers for fine-tuning the display.

Ye olde CRTs were a mixed bag for repair purposes—easier to access than today’s tight-fitting flat panel displays, but boy were they dangerous if mishandled. Those high voltage warnings are no joke.

All the lead (Pb) in the CRT glass is slightly more joke-worthy, but it’s still not very funny.

Between the CRT and the capacitors, disconnecting this power supply sort of feels like disarming a bomb. 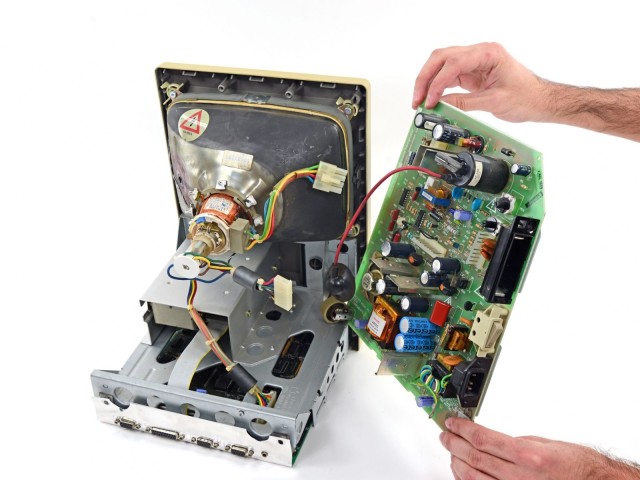 To the tune of Mission Impossible, we quickly and safely remove the power supply. No electrocuted technical writers, today.

This 60 Watt power supply is Apple Part number 630-0102. We think 60 Watts peak is pretty dang impressive for an entire computer and CRT display.

Our comparison iMac features a 186 Watt power supply, that fits onto a considerably smaller circuit board than the 128K’s. 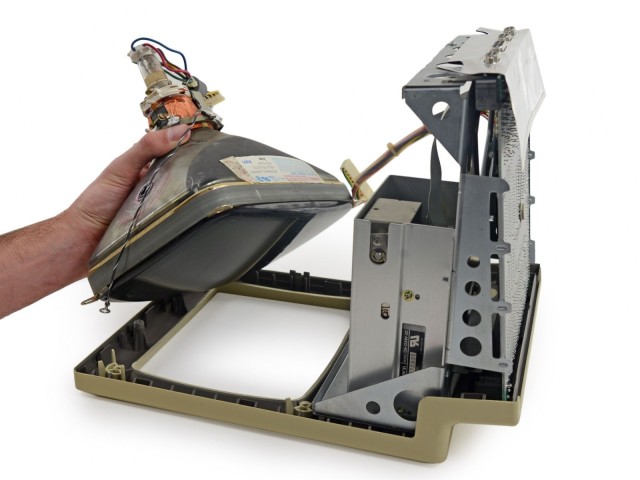 And the award for most noticeable technological advancement goes to: Mac displays. This enormous old CRT is a far cry from the graphics offered by today’s ultra-thin Retina displays.

Bulky, heavy, and full of lead, these old-school electron guns in vacuum tubes and their deflection coils were all the rage in the ’80s. Totally tubular!

Cult of Mac adds: The original Macintosh display was only 1-bit black & white, yet ushered in the revolutionary era of WYSIWYG (What You See Is What You Get) graphics and desktop publishing.

THE MACINTOSH LOGIC BOARD 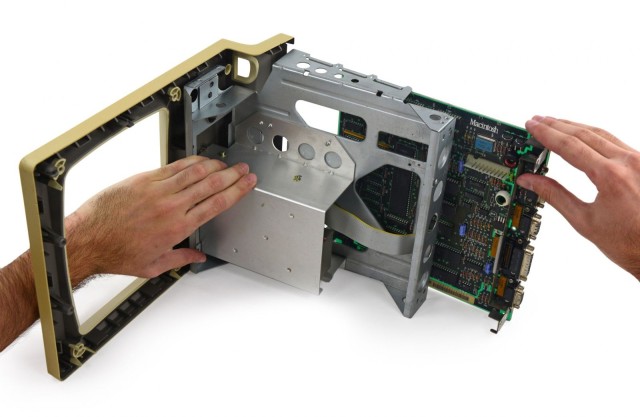 Even 30 years ago, Apple had a thing for tidy packaging. With just a little coaxing, the logic board slides neatly out of its tray.

There’s no active cooling on this daddy Mac. The Motorola 68000 has a little breathing room, but nothing more. This processor, commonly called the 68k, is a surprisingly popular chip. Aside from the Macintosh, it can also be found in the Sega Genesis, Commodore Amiga, Atari ST, and even the TI-89 graphing calculator.

Cult of Mac adds: The 68k also powered the Lisa, Apple’s predecessor to the Macintosh. 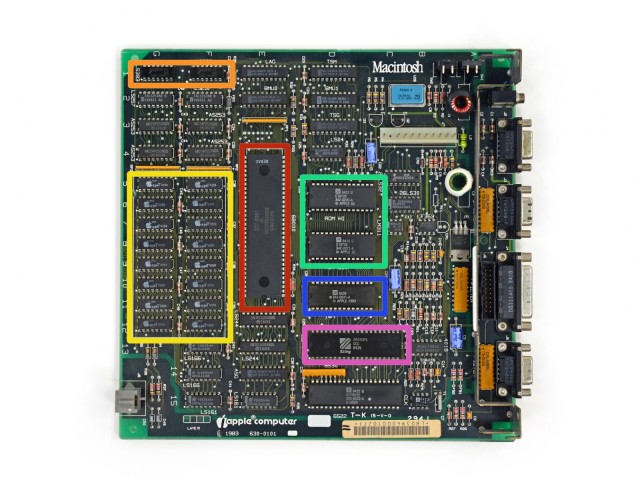 Notable ICs on the Mac 128K logic board: 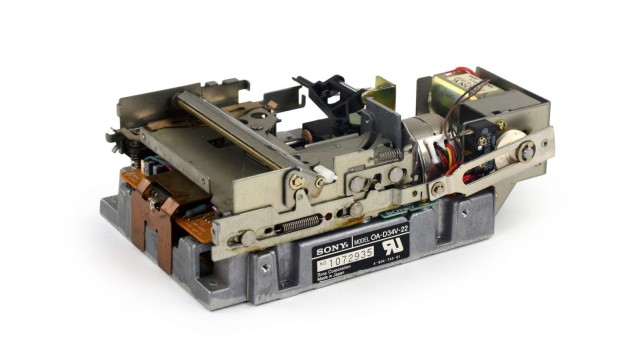 What do we have here? A Sony… printing press? Planer? Turbo Encabulator?

We know you guessed right; it’s a 3.5″ floppy disk drive, again leading the charge to new technology, leaving the old 5-and-a-quarter inch drives in the past.

Cult of Mac adds: The Macintosh almost shipped with the same 5.25-inch “Twiggy” floppy disk drive the early Lisa used, but the Sony 3.5-inch drive earned its job in a rather entertaining fashion. 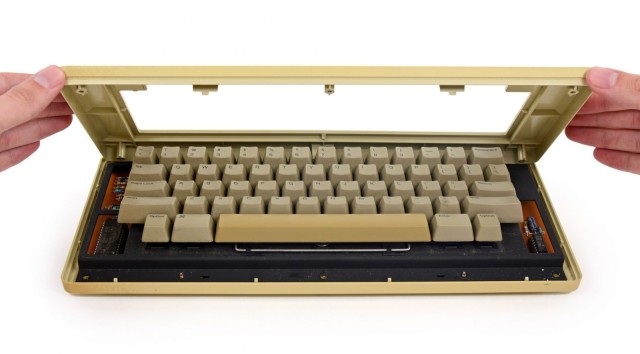 Removing a few screws allows us to take a peek inside the keyboard.

But we don’t get much farther than that. Each mechanical button is soldered to the board. So unless you want 12 steps of us busting off the plastic keys…

Cult of Mac adds: The keyboard cable used a standard RJ11 telephone connector, but the pin wiring was different. That meant existing phone cords wouldn’t work as a substitute.

The unholy union of phone and computer was never seen again. 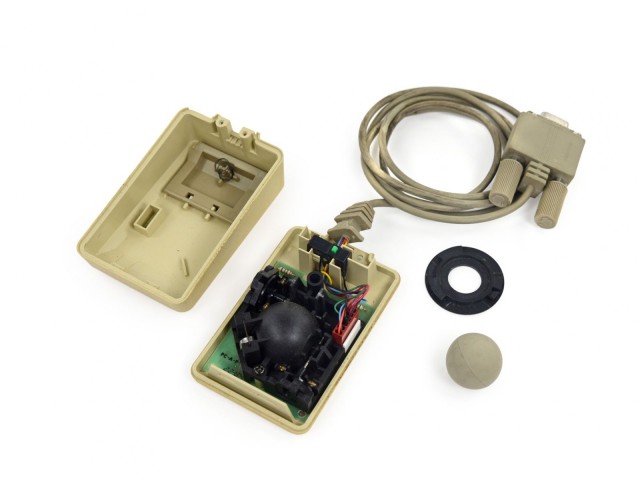 Now for some mouse dissection! Don’t worry—this will be much more humane than what went down in high school biology class.

We pop out the ball with a quick twist.

Cult of Mac adds: We remember the lost art of cleaning mechanical mice…

Opened up, we find plenty of plastic viscera, two quadrature encoders and a few resistors. Surprisingly, that’s about all we find.

This simplified design decreased costs and improved reliability by moving the complex circuitry out of the mouse and into the desktop, paving the way for cheap desktop mice for years to come. 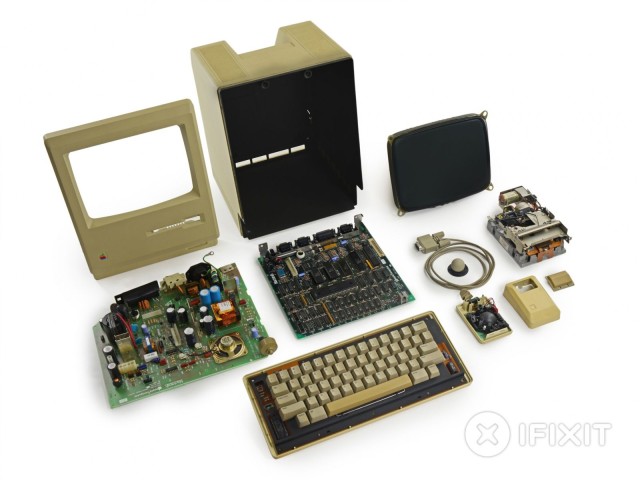 • Once you’re inside, it’s simple and straightforward to replace any of the main components: floppy drive, power supply, logic board, or CRT display.

• Limited upgradability: The RAM is soldered to the logic board and can’t be replaced, and there’s no slot/port to add an internal drive. However, you can expand storage via an optional external floppy drive.

• The case is fairly difficult to open, with deeply recessed screws and a tight panel fit.

• There are some dangerous high voltages on both the power supply and the CRT that make repair potentially hazardous. 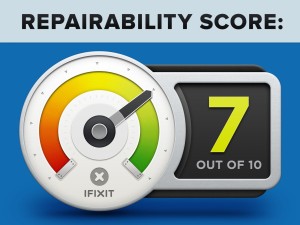 Cult of Mac adds: Thanks guys, great job! Here’s to another 30 years of Macintosh!