Apple likes to keep its secrets close to the chest, but Cult of Mac has grabbed an exclusive look at some behind the scenes video of Apple iPhone 5s repair processes. A tipster behind the Genius Bar has shown us portions of Apple’s official iPhone 5s and iPhone 5c repair videos that showcase the emphasis Jony Ive and the design team placed on repairability when creating the latest iPhones, as well as the crazy little repair tools Apple uses to ensure quality repairs.

Despite launching to record breaking sales numbers in September, Apple’s iPhone lineup has come under fire again and again for its apparent lack of repairability. Catherine Rampell at the the New York Times went on a bullshit parade two weeks ago claiming Apple tries to make your iPhone break so you have to buy a new one.  Even Apple fans like our pal Kyle Weins, at iFixit,  bemoaned Apple for not making the iPhone 5s more repairable for users.

To consumers, the locked enclosures of the iPhone 5s may seem like a guarded unfixable fortress, but the truth is that the iPhone 5s is one of Apple’s most repairable devices ever, you just have to be a Genius to get the right tools for the operation.

The segments of the 12 training videos we saw provided detailed animations of the iPhone 5s and 5c internal components, as well as guides on how to access and swap six components on the device –  speaker, receiver, vibration motor, iSight camera module, battery, and sim ejector tool.

Here’s a picture from Apple’s training guide of the five specialized tools required to swap out iPhone 5c components:

Unofficial guides like iFixit’s iPhone repair instructions call for users to lift the screen with a single suction cup and then pry it off, but Apple has developed the iPhone 5c repair tray to allow Geniuses to quickly open the display and swap components without breaking the display flex cable. They even have an “iPhone Battery Fixture” that’s basically a weighted roller that applies the perfect amount of pressure between a battery and its new adhesive tabs. 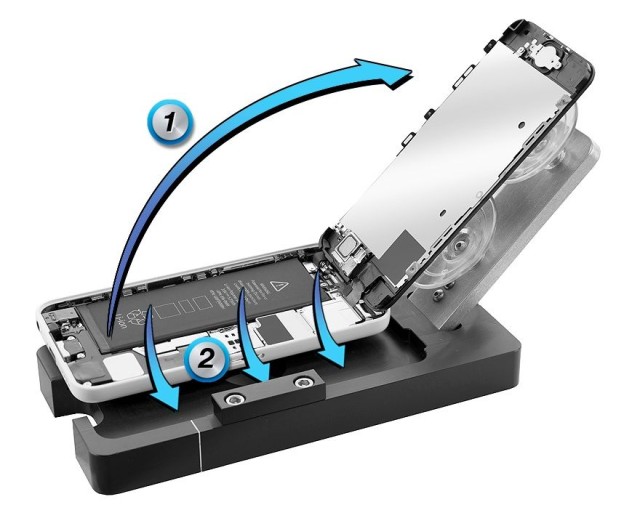 The training videos are packed full of info that show how Apple’s streamlining its repairs process and the nuances that go into swapping even the smallest iPhone components. We haven’t got our hands on a full copy of the videos yet, but we’ll have more to come. Stay tuned.