A Google Glass user in California may have become the first to get a ticket for using the wearable while driving. Cecilia Adabie was stopped by a Highway Patrol officer last night then summoned to the superior court for “driving with monitor visible to driver.”

The ticket has sparked debate over whether or not it should be legal to use Google Glass while behind the wheel.

It’s worth pointing out that Adabie was originally pulled over for speeding, not specifically for wearing Google Glass — but after the officer spotted the device he added that to the ticket, too. As things stand, it’s not completely clear whether Google Glass should be allowed on the road, but many are demanding clearer rules before the device is made available to the public. 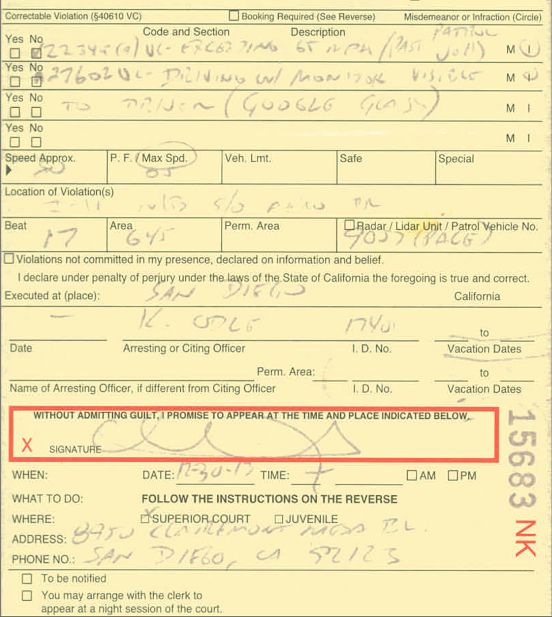 Some argue that Glass isn’t a distraction, and no different to using a dedicated satellite navigation system. But several states have already passed laws against Glass on the road, including Delaware and West Virginia. The U.K.’s Department for Transport has also taken preemptive action against the device.

“We are aware of the impending rollout of Google Glass and are in discussion with the Police to ensure that individuals do not use this technology while driving,” a spokesman told Stuff magazine back in July.

I’m sure there’s still plenty to come from this; Glass users in the U.S. clearly need clarification on whether or not it can be used behind the wheel. What do you think?