I started using Fantastical on my iPhone the day it was released back in November of last year. Like other users of the fantastic (bad pun intended) Mac app, I couldn’t wait to have its natural language parsing on my iPhone. With Fantastical, you can just type “get lunch with Buster at 3 tomorrow” and be done. Far better than the poorly-designed rigamarole that is Apple’s Calendar app.

Today Flexibits, makers of Fantastical, released the biggest update to their iPhone calendar app since its original release. Fantastical 2 for iPhone is a completely new app that works only on iOS 7 and features a new design, new features, and yes, a price. 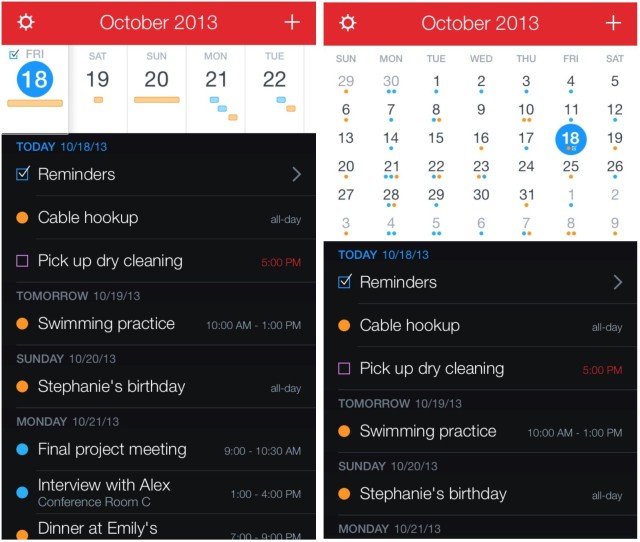 The first thing you’ll notice on your home screen is the new icon, which has received a pleasant update that better fits the iOS 7 aesthetic. Fantastical has always been a polished app, but version 2.0 takes the interface to the next level. The general layout users know and love is still there with the “Day Ticker” up top and the list view of events down below, but the animations are so much smoother and quicker.

All of the design changes don’t change the importance of the content (your schedule). When I first saw the app a few weeks ago, my initial reaction was, “Duh, of course this is how Fantastical should look in iOS 7.” It just makes sense. I like how the app’s signature red now bleeds into the status bar. The new week view in landscape mode is particularly great. 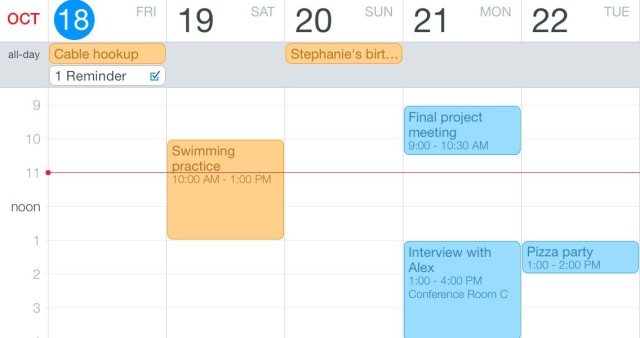 There are new features in Fantastic 2 as well. Flexibits has added integration with Apple’s Reminders, so you can create a reminder just as easily as adding an event. “Remind me to go shopping tomorrow,” for example. If you don’t use Reminders you can turn it off. Like you calendars, everything is synced at a system level so updates will appear on other devices.

The language parser has been improved with additional keywords, like “reminder,” “todo,” “task,” or “remind me to.” Smarter repeating alerts can also be added for something like needing to take meds at 6 p.m. every day for the next 10 days.

Small additions include TextExpander support and iOS 7-specific things like background refreshing and support for system-level font adjustments. When you’re adding a new event on an iPhone 5 or later, there’s a new extended keyboard layout with quick access to numbers and a couple symbols. It’s a pretty handy addition.

And yes, there is a new light theme. You can toggle it in the app’s Settings.

“We wanted to make an iOS 7 iPhone calendar app worthy of the name Fantastical,” said Flexibits co-founder and Fantastical designer Michael Simmons. “With its beautiful iOS 7 design and functionality, we’re confident users are going to be love Fantastical 2 for iPhone.”

Given how violently some App Store users have been responding to developers charging again for new iOS 7 versions of their apps, Simmons was concerned about pricing. But he feels confident that the app will sell itself. Flexibits has been working on this update since WWDC in June, and at the end of the day, making apps is a business.

Introductory pricing in the App Store for Fantastical 2 is $2.99, and regular pricing will be $4.99. It’s a totally separate app that only works on iOS 7. Users of Fantastical 1 who don’t want to upgrade will still receive occasional updates with critical bug fixes.

If you’re a previous user of Fantastical, this new version is a no-brainer. If you’re not happy with Apple’s Calendars app, you need Fantastical now.