Would you pay for your favorite app more than once? App Store developers are betting that you will.

When Apple unleashes iOS 7 on September 18th, hundreds of thousands of apps will be revamped for the new operating system in the days and weeks to come.

Each major 1.0 release of iOS marks an opportunity for app developers to go back to the drawing board. And with its radically new design language and hundreds of new APIs, devs are seeing iOS 7 as not only a clean slate, but a chance to earn more money off their existing apps. 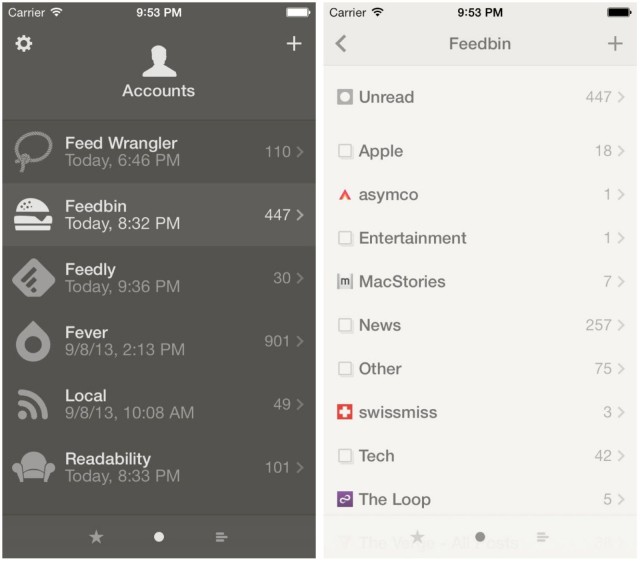 Last week, Reeder, one of the most popular RSS clients in the App Store, relaunched as Reeder 2 for iPhone and iPad. Instead of a free update to the existing app, Reeder developer Silvio Rizzi chose to release version 2.0 as an entirely new app for $4.99. If existing users wanted the new, iOS 7-ready version, they paid the same amount as someone downloading Reeder for the first time.

A common trend among devs who have chosen to stick with the traditional, what-you-pay-is-what-you-get-model

The choice to release major updates to existing titles as separate, standalone apps in conjunction with the iOS 7 makeover is a common trend among devs who opt to stick with the traditional, what-you-pay-is-what-you-get-model of selling apps, like Rizzi, .

Update: Rizzi reached out following the publishing of this article with some clarifications on his decision to price Reeder 2 independently from the first version.

“When Apple showed iOS 7 to the public, I was already working for months on Reeder 2,” said Rizzi. “Reeder 2 is [an] all-custom UI which is also the reason it also runs on iOS 6.1 and doesn’t look that much different when doing so.”

“If I had to do this for free, I would never have put that much work into this”

Rizzi saw releasing Reeder 2 as a universal download for iPhone and iPad as “a good compromise between a free update and two separate updates for iPhone and iPad. That said, if I had to do this for free, I would never have put that much work into this. If I do charge, I really try to make sure it’s worth it even if it means that I have to delay the release of the app, which I actually did. The initial plan was to release this in late spring at the latest.” Making apps is a business, and it’s easy for users to not consider the kinds of decisions that go into making quality software.

“I’m sure many users are expecting developers of popular applications to simply update interface elements, compile some code and easily drop a brand-spanking new version of their app onto the App Store for free,” said Gedeon Maheux, co-founder of The Iconfactory and one of the minds behind Twitterrific, in a recent blog post. Maheux sees iOS 7 as  a “perfect” opportunity to generate income from existing apps:

There’s little doubt that the majority of iOS 7 updates to existing apps will be free (which will please Apple), but I suspect there will be a surprising number of developers who will use the launch of the new operating system to completely re-boot their app, and why not? The visual and interactive paradigms iOS 7 mark a natural breaking off point and a perfect opportunity to re-coup costs. Some existing paid apps might even adopt an iOS 7 only strategy which means they’ll have no choice but to charge again.

Apple has not offered a way to upgrade pricing in the App Store, so devs are forced to create separate versions of apps and pull outdated ones from the store.

“When you ask a customer to pay for the upgrade, there should be good reason for that.”

Readdle launched the iOS 7-ready app Calendars 5 last week as a separate app and the response from users was positive. More than 25 percent of previous users paid the upgrade for version 5 within 72 hours of its launch, making the app the number three top paid app in over 40 countries. 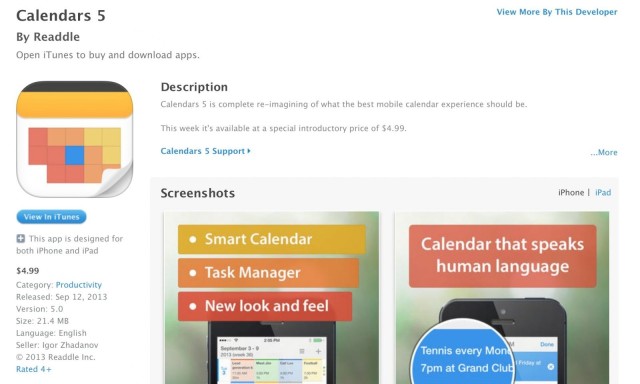 “We at Readdle believe that when you ask a customer to pay for the upgrade, there should be good reason for that,” Readdle CEO Igor Zhadanov told Cult of Mac. “It doesn’t have to do much with the iOS 7 update, rather it’s about the product. We would be happy to provide discounts for our existing customers, but the lack of the upgrade pricing on the App Store is an issue. Still, Apple is clear on their vision, so we can only have workarounds like an introductory price during the first week.”

Realmac Software recently announced that its award-winning to-do app, Clear, would be sold as a separate app for iOS 7. “For us, just as with many other developers, the launch of a new version of an app represents a significant amount of work and financial investment,” Realmac Product Manager Nik Fletcher explained to Cult of Mac. “Clear for iOS 7 is a new app because the majority of the work in it is a new app.” iPad support is coming for the first time with the new release and Realmac has spent the last eight months working on it.

The Omni Group has announced the same strategy for the iOS 7 versions of OmniFocus, OmniOutliner and OmniPlan. “The new apps will be released as new products in the App Store; you’ll purchase them just like you would any other app and they will be completely separate from the old versions,” said Omni CEO Ken Case on the company’s blog.

But not all devs agree on charging new and existing users for iOS 7 versions of their apps. The iOS developer of the popular weather app Dark Sky, Adam Grossman, told Cult of Mac that a huge redesign is coming for the app soon, and it will be totally free. There were a number of reasons for the decision, including not wanting to “piss off our existing users, who we love.”

“Because of the relative expense of Dark Sky, we’ve effectively got zero percent of the iPhone market (give or take a thousandth of a percent),” said Grossman. “So the untapped customer-base is essentially infinite, which means we have constant revenue coming in. We don’t need to make money twice off the same people. . . yet.” Dark Sky currently costs $3.99 in the App Store.

The most popular way devs make money in the App Store nowadays is by employing the ever-popular freemium model. Instead of charging up front, users are prompted (and in unfortunate cases, forced) to pay to unlock features via in-app purchases. Games like Plants vs. Zombies 2 are good examples of this approach.

Most App Store customers are hardly willing to pay money for apps up front period, much less titles they already own.

The freemium model has been proven to work, and the fact that the vast majority of App Store apps are free reflects the shift in strategy. Most App Store customers are hardly willing to pay money for apps up front period, much less titles they already own.

Fantastical designer Michael Simmons has a more straightforward approach to upgrade pricing for software. “For a simple, compatibility-only update to iOS 7, I consider this an update and it should be free.”

However, Simmons recognizes that devs have the right and should feel free to charge for major rewrites of their apps. “But if an app is redesigned with major new features and functionality, I consider this an upgrade and believe the developer should definitely sell it as a new app,” said Simmons. “Unfortunately, some users seem to be unaware that a developer’s time is not free.”