As you may have seen in our previous post on Apple’s fourth quarter (Q4) financial report, the Cupertino company has beat out Wall Street expectations this quarter, showing off a revenue of $37.5 billion with a hefty 7.5 billion profit to go along with it.

To help you make sense of Apple’s business this quarter, as well as some general trends of the last five years, we’ve taken it upon ourselves to put together some charts in an easy-to-read format to show you how the numbers break down, from revenue and profit margins to how many devices Apple is selling, to how much money it’s making from those sales.

Let’s take a look at some of the numbers in visual form, and see what we can take from it.

As you can see in the two charts above, the 2013 fiscal year has been a little soft, with quarterly numbers (measured by revenue, gross margin and profit) all taking a bit of a dip, except for revenue, which made a tiny recovery this past quarter, as compared to Q3. Looking at the five-year chart, however, we can see that Apple is doing quite well, thank you very much, with a Q4 increase year-over-year every year except this past one, where it held fairly steady. 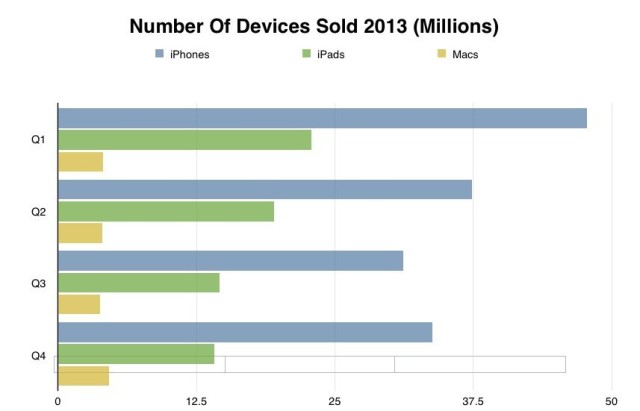 Looking at this next chart, we can really see the impact the iPhone has had on Apple’s device sales. The company sells around eight times as many iPhones as Macs. Even as Tim Cook re-iterated the company’s commitment to the Mac, the writing is on the wall: Apple is a mobile computing company, straight up. Let’s take a look at how much money these devices pull in for Apple, as well, in the following chart. 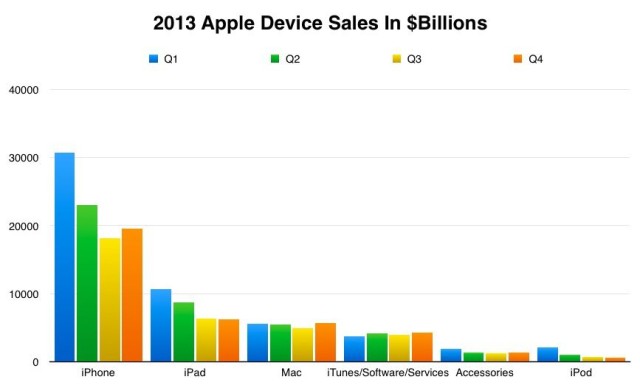 Here’s the economy of scale. While Macs account for a much higher per-device amount, the sheer volume of iPhones and iPads generate a stunningly huge amount of revenue. And don’t get us started on the poor iPod. Looks like Apple’s goofy cases sell more than those beleaguered old-timer devices these days. 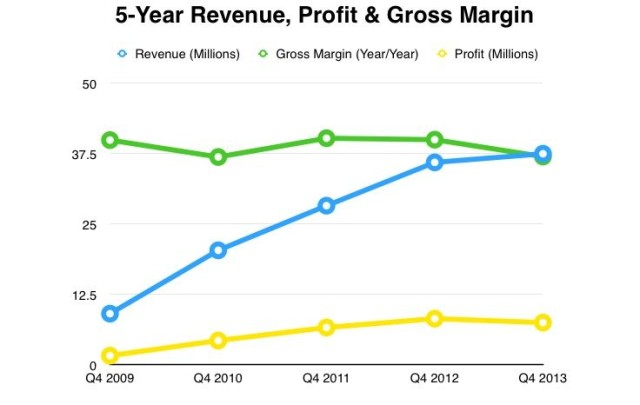 Finally, taking a bigger step back, we can see that over the past five years, Apple has seen a huge increase in revenue, and maintaining a really large profit and gross margin (basically, a measure of the amount money a company brings in for stuff it sells, accounting for how much it costs to make that stuff). Why do we see such a huge revenue spike? It’s hard for this layman to tell, but it can’t be a bad thing, can it?