It’s been well over a year since the Apple TV received a significant refresh, so we’ve long been wondering whether Apple was planning to unveil a new model at its iPad event this fall. Amazon listings in France and Germany seem to suggest that’s the case, with the $99 set-top box now out of stock until October 23 — a day after Apple’s event. 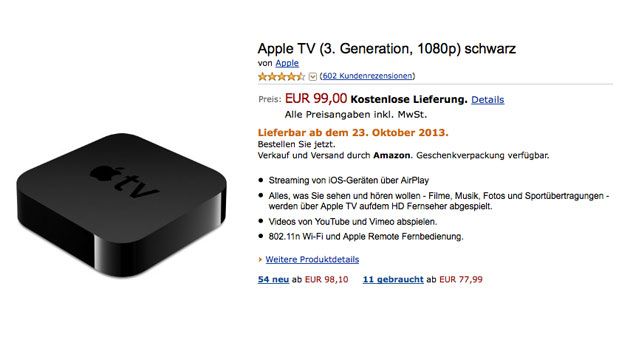 This could be a complete coincidence, of course, but it’s not often Apple products sell out like this — unless they’re hugely popular right after their initial debut, or they’re at the end of their life cycle and are waiting to be refreshed. And you could certainly put the Apple TV into that second bracket.

March 2012 was the last time the device received a significant update, which added a new processor and support for 1080p video playback. So it is certainly due for some attention.

We know Apple isn’t planning to discontinue the device; it may not be a massive seller, but the Cupertino company sees it as a “hobby” product and it’s not going to give up on it. It has also been working hard to bring new channels to the device in recent months.

You may want to wait until after next week’s event before you invest in a new Apple TV, then. It will take place on Tuesday, October 22, and we expect to see updates to both the iPad and the iPad mini.