When I received the UE Boom in the mail and opened the mailing box, I thought maybe the PR rep had secretly slipped me a bottle of Scotch. Not that I would have minded, of course.

It turns out that this ruggedized little portable Bluetooth speaker by Logitech-owned Ultimate Ears (UE) comes in some slick packaging that I’m loathe to get rid of, it’s that cool. The cylindrical speaker fits snugly in the center portion of the box, and each side has a cute little compartment where the bright yellow power plug and flat premium micro USB cable fit in, each with its respective symbol printed on a little flag. It’s striking packaging, which should go over well with consumers.

Luckily, the actual speaker here, a smallish cylinder made to be set on end vertically as well as on its side horizontally, is a fantastic sounding Bluetooth speaker, with a full, clear tonal spectrum that’s surprising in something so small. The bass response could be a bit punchier, but I don’t find that to be an issue at all, and actually prefer the more balanced tonal approach. 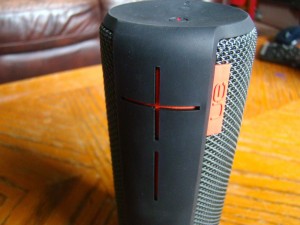 And boy, is this sucker loud. There are volume controls on the unit itself, on the side of the cylinder near the “top” if it’s set up on end to point the power button at the sky. The buttons are beneath large stylized plus and minus buttons, colored a contrasting orange on my dark grey review unit. When I first paired my iPhone 5 with the UE Boom, I — no kidding — had to turn the thing down several times before it was quiet enough to  handle in the living room of my house. With most of the portable speakers in this class that I’ve used before, I’ve typically turned everything up to max volume to get a decent decibel out of them; not so here.

Where this intensity comes in handy is outside. I’ve used the UE Boom in my yard, on my bike, and in my car and it’s loud and lovely in every location. I was able to provide music for a smaller outdoor BBQ just the other day with only the Boom as our speaker of choice. The fact that up to eight Bluetooth devices can pair with the UE Boom at one time is yet another killer feature, as it let several of the BBQ guests play their favorite tunes through the device, without ever having to re-pair between users. I let my iPhone 5, iPad mini, and Macbook Air all pair with the UE Boom so I can send audio from any one of these devices at a moment’s notice, without having to re-pair or mess with configurations. 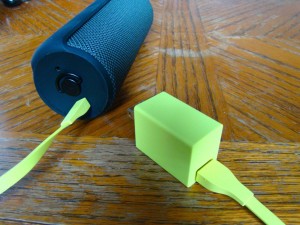 The battery lasts a good long time between charges, and frankly, I’ve never needed to run it for the full 15 hours that Logitech claims. I have, however, powered the aforementioned BBQ without plugging it in once, and I had used it quite a bit the previous day. Charging the device is simple, and the bright yellow flat USB cable is easy to find, even in the clutter of my tech pile. It is nice that it uses a standard micro USB cable, though, in case it needs to be charged away from home.

Pairing is simple, and the UE Boom provides a nice conga drum sound when it is successful, along with a different percussive sound when it powers on and off. There’s a cute little hook at the end cap opposite the power cable, making it a cinch to attach to a carabiner, backpack, or inside a tent when camping. The material it’s made of is rubbery and easily washed, as the speaker unit itself is water and stain resistant.

This is a fantastic sounding Bluetooth speaker, with a full, clear tonal spectrum that’s surprising in something so small.

Overall, this is my new go-to portable speaker both indoors and out. It’s small enough to go with me everywhere, doesn’t need a protective case, and is loud enough to provide quality sound in almost any environment or space. While the bass response will disappoint those who prefer deeper, punchier low frequencies, the entire tonal spectrum is well-balanced and easy on the ears. There’s even an app for iOS that helps tailor the sound, check the battery level, and rename the speaker, if you like.

The UE Boom is the loudest speaker of its size that I’ve ever used, though at $199.99, it may also be the priciest. If money isn’t an issue, folks who need a loud portable Bluetooth speaker that works as well outdoors as it does indoors would be well served with the UE Boom from Logitech.