We already have a pretty good idea of what Apple’s rumored low-cost iPhone will look like, thanks to a number of images which purportedly show the handset’s plastic rear casings on the production line. And today yet more have surfaced, this time showing off potential blue and white models.

The last images revealed the red, yellow, and green casings, while the latest, also obtained by French website NowhereElse, show off the blue and white models, too. Recent rumors have claimed that the budget iPhone will be available in an assortment of colors just like the iPod touch, and these photos seem to back up those claims.

There is a chance that these are fake, of course, and it if weren’t for the metal chassis mounted within them, we’d probably dismiss them as that very quickly. But that metal chassis looks too much like other iPhone chassis.

Take a look at the image below comparing the supposed budget iPhone’s internals with those of the iPhone 5. They both have four holes positioned similarly around the Lightning connector, and three holes that’ll secure the logic board. 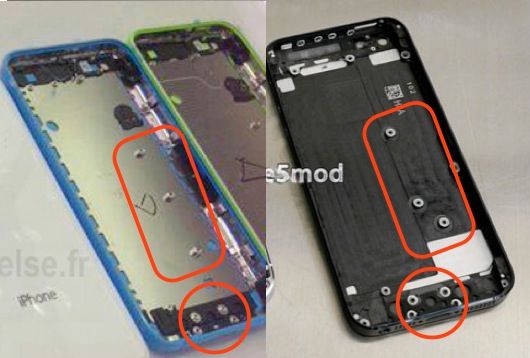 They could be very good fakes, which is something we should bear in mind. But they look pretty genuine to us. If they’re not final budget iPhone parts, then there’s certainly a good chance they were built by Apple for a prototype.