I asked Siri something yesterday, and s/he – as usual – misheard me. Whatever I actually asked, Siri thought I said “Election Tacos,” and as that didn’t really fit in with Siri’s abilities, he did a web search. Only instead of popping me into Safari, the results were shown right on the lock screen. And that’s not all.

At the bottom of Siri’s results, presumably supplied by Bing, there’s a “button” to make the same search on Twitter. This brings up the results, still on the lock screen. And all the while the formatting is as clean as you’d expect, with just a title, a URL and a short summary. 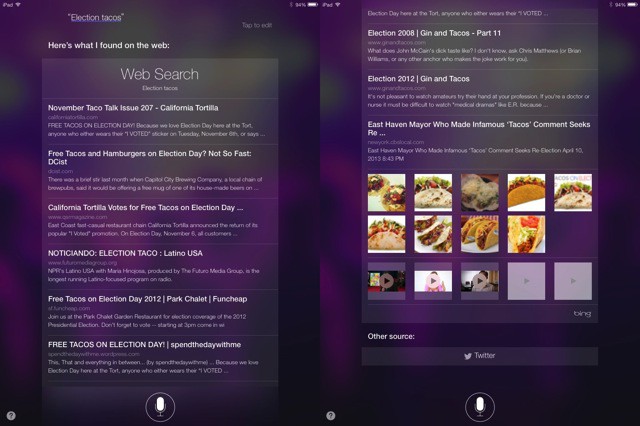 It’s simple, but surprisingly great. You can settle pub arguments or check a recipe all without even unlocking your iPhone. And the clean, ad-free display makes me thing that this is the reason why Siri now uses Bing and not Google – after the whole maps debacle, I figure there’s no way Google would let Apple display its search without ads, whereas Microsoft is more than willing to bend over.

Still, none of this is going to make you feel any less dorky when you start asking Siri questions in public. Now, if you’ll excuse me, I’m off to eat an Election Taco.