This somewhat blurry image of a game controller built by Logitech is believed to be one of the first Apple-approved controllers for iOS 7 that will join the “Made for iPhone” program. It’s built for the iPhone 5, and it’s been designed to meet Apple’s new guidelines for Mac and iOS game controllers.

The image was obtained by Kotaku, which “can’t tell you who gave it to us or where it was seen, but we can vouch for this image’s authenticity.” Unfortunately, there’s very little information about the controller, but Kotaku is confident it will be one of the first to take advantage of the third-party controller support built into iOS 7.

Apple announced the new feature during its WWDC keynote last Monday, and it followed that up with new guidelines for game controllers. As you can see from Apple’s diagram below, the Logitech controller has clearly been built with these specifications in mind.

It has a directional pad on the left side, four action buttons on the right, as well as what is likely to be a start or pause button. 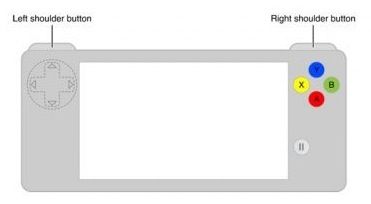 This controller is likely to be one of many built for iOS 7, which is now in beta testing with developers. The update will be made available to the public this fall, alongside new iOS devices.