Jailbreaking has come a long way since the dark ages of the original iPhone. Now it’s a simple matter of plugging your iOS device into your computer for five minutes and following a few easy steps. But it used to be way more complex.

Let’s rewind to 2007, back when only a handful of hackers were tweaking and unlocking their iPhones and iPod touches. It took 74 individual steps to jailbreak the original iPhone OS.

“Jailbreaks for the iPod touch first surfaced a month after the first model was released in September 2007, when hackers released JailbreakMe 1.0 (also called “AppSnapp”) to jailbreak iPhone OS 1.1.1.,” according to Wikipedia. Once you jailbreak, you can install apps and system-level tweaks that Apple doesn’t allow in the App Store.

Today I stumbled across this interesting MacRumors forum thread from 2007. It details each step for performing the first public jailbreak. The poster said, “Hey all, I take NO CREDIT for this guide, I followed it on the #itouch irc channel from the amazing planetbeing!” An IRC channel is an online chat room were hackers and coders collaborate. Planetbeing is the same hacker who is currently spearheading the impending iOS 6.1 jailbreak.

The tutorial is full of tedious terminal commands and SSH-related steps that would make most jailbreakers give up and walk away today. An except:

38. Open com.apple.update.plist in a text editor

Right after it says <string>/usr/sbin/update</string> add:

39. Save the file. Upload the modified version with “putfilecom.apple.update.plist”

41. Reboot the iPod twice. The first reboot should set the required permissions. The second should start the ssh server (since proper permissions are now set). And close iPhuc.

For comparison, the last major public jailbreak for the iPhone 4S looked like this: 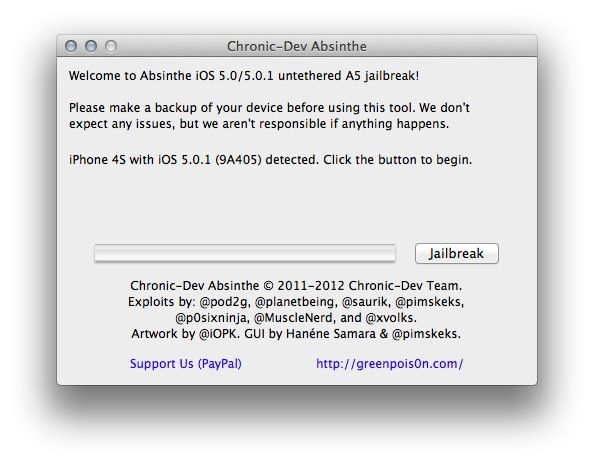 The next jailbreak tool for iOS 6.1, named evasi0n, looks to be the most simplistic and clean method of jailbreaking yet. It’s slated to drop within the next few days.