For a game that’s been downloaded over 170 million times and spawned countless ripoffs, the sequel to Temple Run came as a complete shock. The smash-hit endless runner started sneaking into App Stores around the world yesterday, and it went live in the U.S. late last night. Imangi Studios, the small company behind Temple Run, had no promotional material or teasers leading up to the release.

But now that Temple Run 2 is here, fans of the original can sprint, jump, slide, and fall through a new and improved world. With zip lines, new power-ups, characters, and a mine cart, Temple Run is better than ever. 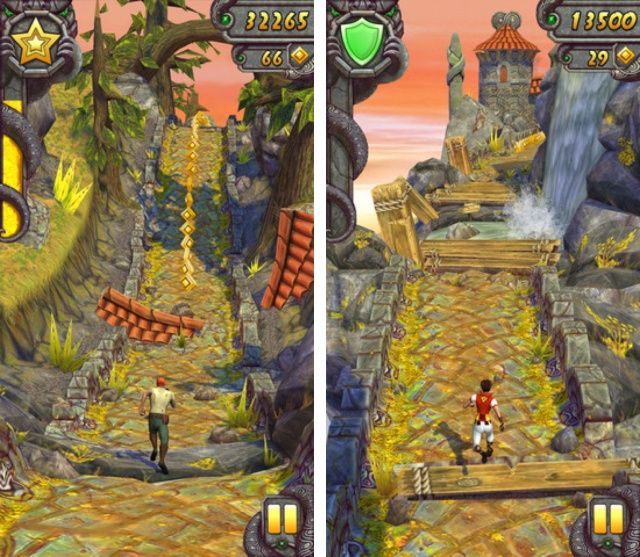 One of the coolest things about the success of Temple Run is that it’s the lovechild of a husband and wife, Keith Shepherd and Natalia Luckynova. The couple’s Imangi Studios is behind other successful games like Max Adventure, and they recently partnered with Disney to release a spinoff of Temple Run based on the animated movie Brave.

“We wound up with all this stuff we wanted to do in Temple Run that we couldn’t physically do as an update to the original,” said Shepherd in an interview today with AllThingsD. “It was just a really small team of us that built the first one (Shepherd, Luckyanova, and artist Kiril Tchangov), and we had no idea that it was going to go on to become this worldwide phenomenon. It wasn’t designed to be ported to other platforms or to be continually added to over the next couple of years. We wanted a fresh start.”

Temple Run is by far Imangi’s biggest success, and it’s been downloaded close to 200 million times in the App Store and Google Play combined. The game has definitely become a household name for iOS users since it launched in August of 2011.

While Imangi originally sold Temple Run as a paid game, the wildly successful title has since gone freemium, a model where developers entice users with a free download and then sell in-app purchases for upgrades.

You’ll notice that something is different the moment you start running. Unlike the original, your runner dangerously navigates the ins and outs of a temple world suspended high in the clouds. When you’re outside, the sun is getting ready to set. Inside the caverns, you guide a mine cart through a precarious railway system lit by torches. 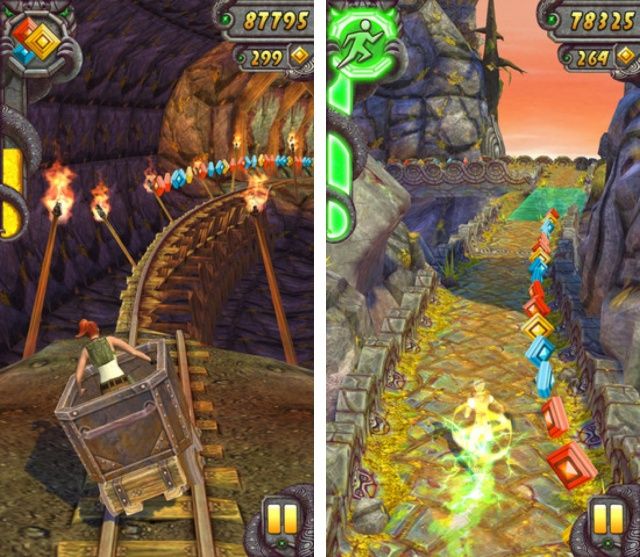 The graphics in Temple Run 2 have definitely been improved. The world is a lot more detailed. I did notice a little lag on my third-gen iPad, but it ran as smooth as butter on my iPhone 5. Gameplay is the same as the original, but there are more twisty turns and drop-offs. The environment feels much more expansive. The monkey that chases you is also much bigger.

There are four different characters, and each one has a varied set of abilities and power-ups—that adds an element of strategy. Coins are everywhere, but you’ll need rarer gems to purchase consumable items like extra lives. To make real progress in the upgrades department, you’re probably gonna fork over a few bucks for some coin packs.

I enjoy Temple Run 2 more on the iPad because the larger display lets me take in more of the environment. But this is also a great way to have fun on the iPhone. I’m not going to be able to put it down for the foreseeable future.

The original Temple Run is still available too, but make sure to pick up this awesome sequel in the App Store. It’s fantastic, good fun. Don’t fall!