LAS VEGAS, CES 2013 – Withings has now added a heart-rate monitor and an air-quality sensor into their WiFi Body Scale, which previously just measured weight and body-fat percentage. In fact, their scale now has so many sensors, they’re not even calling it a scale anymore.

The precocious new Smart Body Analyzer — which is what Withings is calling their scale now — is the first weight-scale equipped with a heart-rate monitor. Withings says it’s an obvious pairing, and they’re trying to relocate the scale to the bedroom, where users can step out of bed and onto the scale, for an easy measure of resting heart-rate (a trusted indicator of fitness level, among other health variables) and weight. It’s a brilliant pairing.

The air-quality sensor, on the other hand, seems a little more out of left field. Withings has sandwiched the sensor under the glass surface of the scale, to measure the amount of carbon dioxide in the air passing though the device, as well as the air temperature. Withings says high carbon dioxide levels are responsible for a variety of problems, like dizziness and difficulty breathing.

Joining the new scale is a Fitbit-like device called the Smart Activity Tracker. Like the Fitbit and its ilk, the 8-gram Tracker is worn all day and will record steps taken, distance walked (or run), calories burned and how well you’ve slept, and then send the information via Bluetooth 4.0 to your device. The big difference: It also records your heart-rate — a trick none of the other tracking devices have mastered. Right now the Tracker only works with Apple products.

The Smart Body Analyzer (the scale) should be available within the next couple of months for $150. No pricing yet for the he Smart Activity Tracker, which should pop up in March. 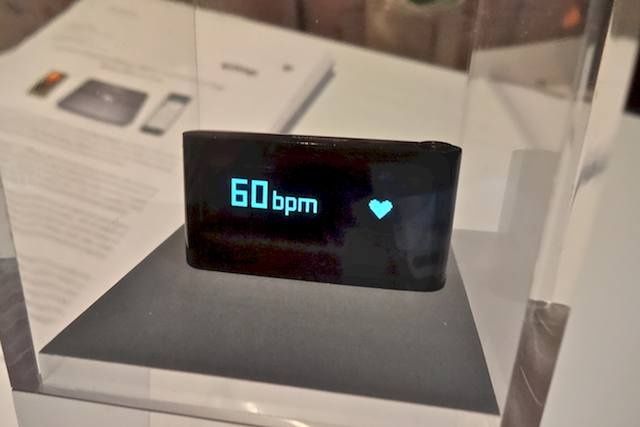