Life is Magic is a location-based free-to-play game that uses your actual location to populate its fantasy/steampunk-themed role playing game (RPG). We reported on it back in September after a meetup with the game developers at PAX, but the game is live on the App Store now.

It’s like an online multiplayer game that turns the real world around you into a gorgeously illustrated land of magic, complete with dungeons, monsters, and treasure. The combat will feel familiar to anyone who’s played a turn-based JRPG game like the Final Fantasy series.

You can connect via Facebook or email address to create an account, then tap on various businesses and buildings around you on the game map. Each one can be influenced by you if you spend the magic energy to do so. Spend enough energy and you’re character avatar will be associated with that real-world location, at least until the next person shows up.

I was impressed to launch the game today, after playing in Seattle during the beta, and find myself in Anchorage, my actual home town. I drove around the city on errands, logging in to see how that affected my game play. I was able to influence a bunch of local businesses on my journey around town in real life as well as the one across the magical land in game, as well. 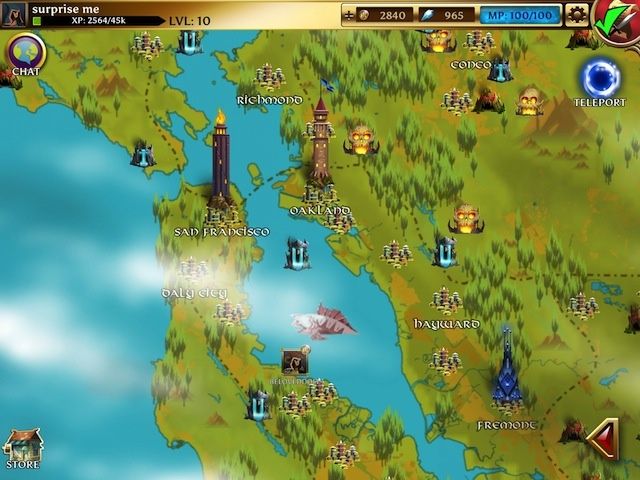 You can level up via combat in dungeons, or by gaining influence at the various buildings in game. When you fight in a dungeon, you can recruit up to two other of your buddies from the Life is Magic community, locally, or Facebook, and take their avatars with you into higher level dungeons, grabbing the better loot. While the early dungeons are fairly simple to solo through, later creatures and dungeons will require a team of players.

You are given various questing objectives (there are over 100 in the game so far) that include gaining certain amount of influence in your town, and conquering towers, which are like regional hubs for battling activity. There are three character classes to choose from: the Mage, who wields magic stones and elemental spells, the Machinist, who fights with heavy armor and weaponry that harnesses the power of lighting, or the Monk, a turtle-like figure who has mastered the martial arts. All three classes use a different type of magic and weaponry, allowing for combinations to fight enemy after enemy in dungeons. Many local buildings also double as the store to purchase potions, coins, and ever better weapons and armor.

If you like RPG gaming, and you like MMO gaming, and you want to play on your iPhone or iPad, Life is Magic should be an instant download. Check it out now, and let us know what you think in the comments below.