Red Robot Labs has kicked state-of-the-art up another gigantic notch in the genre with Life Is Magic, a location-based game like no other I’ve seen. Most games like this pull data from Google maps using location data, put a few animated sprites on top of it, and then build gameplay around that. Heck, even Red Robot Labs’s previous outing, Life is Crime does something similar. 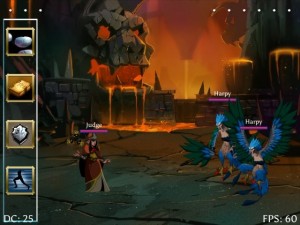 games have never caught my own interest, since it looks about as fun as playing around in the Maps app would be. They’ve taken the “check-in to win” addiction to the next level, yes, but it wasn’t until I got a look at Life is Magic this past weekend at the Penny Arcade Expo in Seattle that I realized just how cool the gaming genre could get.

The game pulls in real-world locations and maps, but then re-skins them to look like a fantasy kingdom. Each area on the map, then, has towers to join, factions, and three classes of hero, Mage, Monk, or Machinist. Players log into the game, connect with other players in the tower, then set out to conquer local areas with a combination of science, faith, and magic spells. The depth continues with dungeons that you can head into on your own or with up to two of your friends in a “magic circle.” Picture the turn-based RPG gaming of something like Final Fantasy game and you’ll immediately understand the combat. Your friends don’t actually need to go with you in real time, and will receive the experience points and loot the next time they log in. 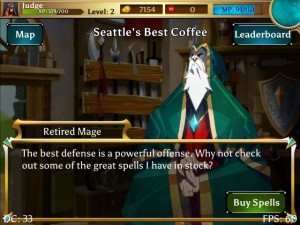 The game looks and plays gorgeously so far, with bright hues and a beautiful fantasy map to play on looking splendid on the iPads the Red Robot team had on display at the Expo. We dropped into a couple of battles, zoomed in and out of the local and regional maps, and generally enjoyed our time in game. I’m seriously excited about playing this one, the first location-based game on a map that plays like an actual video game.

The release date hasn’t been announced yet, but the press materials all say Fall 2012, which means real soon. It will come out on iOS and Android, though the folks at the booth weren’t able to comment on the possibility a simultaneous release. It will be free to play, with in-app purchases helping to fund the game.