Unbound app is a Dropbox-linked photo viewer. Imagine if iOS’ built-in Photos app linked to Dropbox instead of needing you to dick around with iTunes and the flakey Photo Stream, and you have pretty much imagined Unbound.

Designed by Pixite (which also has some other neat photo apps out there), Unbound is simple, yet packs some power under the hood. On launch, it authenticates with your Dropbox account and you can pick a folder to sync with. It defaults to your Photos folder, but you can change this.

Once linked, it downloads each folder, but not the contents (yet), and displays each folder as a stack, just like the Photos app. Navigation is exactly what you’d expect, although the first time you open a folder it takes a little while to grab the images. You can tell the app to permanently save the contents locally on a per-folder basis, although recently visited folders seem to get cached intelligently.

I was surprised to find that the app supports symbolic links in your Dropbox (or, more correctly, Dropbox supports them and they work just fine here). I have a SymLink for my Camera Uploads folder tucked inside my Photos folder, and I can therefore access all the photos that the native Dropbox app has uploaded to my account.

(Note: you can also upload photos to your Dropbox using the app).

Remember that I mentioned that the folders contents are only downloaded when you open that folder? This is important if you do point the app at a huge folder full of subfolders, as it means you don’t fill up your iPhone/iPad with pictures.

You can also view slideshows, create folders and move photos between them (you can also rename photos). And there’s more. Sharing is particularly good as you can just use Dropbox sharing to send a link. You can also save photos to your camera roll, and open in… any available app.

In short, Unbound could completely replace your Photos app.

The app is available for both iPhone and iPad, but you’ll need to buy both versions at $2 a pop – a bargain.

I’ll be playing with this a little more throughout the Christmas vacation, but I have a feeling that – in conjunction with Dropbox’s automatic photo uploads and some clever use of Lightroom, I might be able to put together a way simpler iOS photo ‘workflow’ than has been possible before. 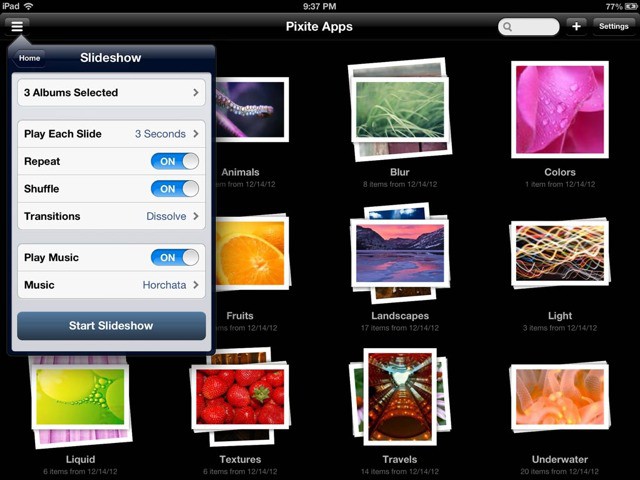