Apple announced the next version of iBooks software at the iPad mini event earlier today, and version 3.0 has now gone live in the App Store. This major update to iBooks brings multiple enhancements, including continuos page scrolling, iCloud support, and integration with iOS 6’s sharing options. Publishers can now push out over-the-air updates for books purchased in the iBookstore as well.

• See all your iBookstore purchases in iCloud—right on your bookshelf with iOS 6
• Scroll vertically through your books with the flick of a finger using the new Scroll theme
• Receive free updates to purchased books—including new chapters, corrections, and other improvements
• Look up definitions for words in German, Spanish, French, Japanese and Simplified Chinese with iOS 6
• Share quotes or thoughts about your favorite book with friends on Facebook, Twitter, Messages, or Mail

Apple has introduced a new scrolling theme that allows you to flip through your book pages vertically rather than from left to right. The two biggest updates in the app are related to iCloud. Like iTunes, you can now view all of your purchases in-app and download select items to be stored locally on your iOS device. Like an over-the-air iOS update, authors can push out corrections and updates to their books with ease.

The sharing options in iOS 6 are present and allow you to post a quote from a book on Twitter or Facebook. 40 new languages and enhanced dictionary support has also been added. 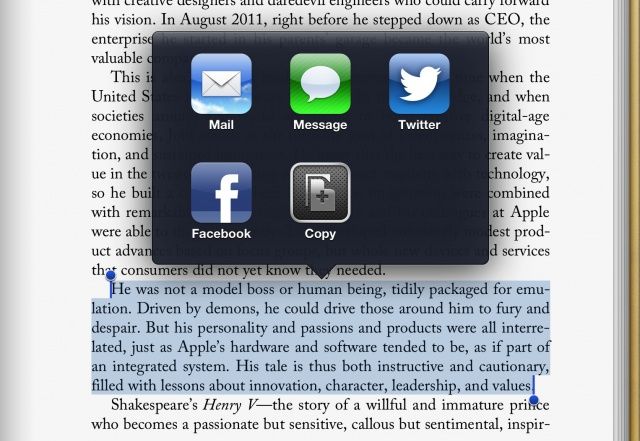 You can grab iBooks 3.0 for all iOS devices in the App Store now.

Number of comments on this postLeave a comment
Posted in: News Tagged: iBooks