Apple won’t let you put the iOS Newsstand icon in a folder for some ridiculous reason. It’s annoying. A lot of people don’t use Newsstand on the iPhone, and after awhile that wooden bookshelf icon seems to just sit there, mocking you. Wouldn’t it to be nice to hide it in a folder with all the other stock apps you don’t you use, like that stupid Compass app?

There was a trick discovered in iOS 5 that lets you hide Newsstand with some finger magic, but the process is a little tedious. A new utility app for the Mac called StifleStand puts Newsstand in an iOS folder for you, no jailbreak required.

Created by prominent jailbreak developer Filippo Bigarella, StifleStand is a one-click solution for hiding Newsstand. Download the app for free, open it, and plug your iOS device into your Mac. StifleStand will recognize the device and all you have to do is click the button. Newsstand will be instantly placed in a folder called “Magic.” I tried it on my iPhone 5 running iOS 6 and it worked perfectly. 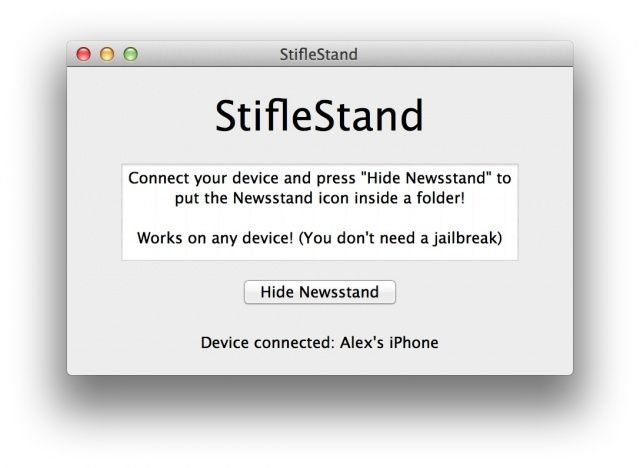 It’s important to note that Newsstand is not intended to be put in another folder, so opening Newsstand while it’s hidden will cause iOS to crash and reboot. The grid of app icons normally displayed in a folder icon will also be empty until you add more icons to the folder that contains Newsstand. Only perform this tick with StifleStand if you never plan on using Newsstand. You can always drag Newsstand back out of the folder you created if you want to use it again.