Earlier this morning Tim Cook published an apology letter to all Apple fans for how horrible Apple Maps have been. Not only did he apologize, but he actually told users that they should try some alternatives while Apple fixes their mapping fiasco.

It’s great that Apple is taking responsibility for their shoddy work, but now that they’ve kicked Google Maps out of iOS 6, what are the best alternative? We took a quick look at the alternative map apps that Tim suggested, to find out which one you should use if you plan to ditch Apple Maps for a while. Here’s what we found out. 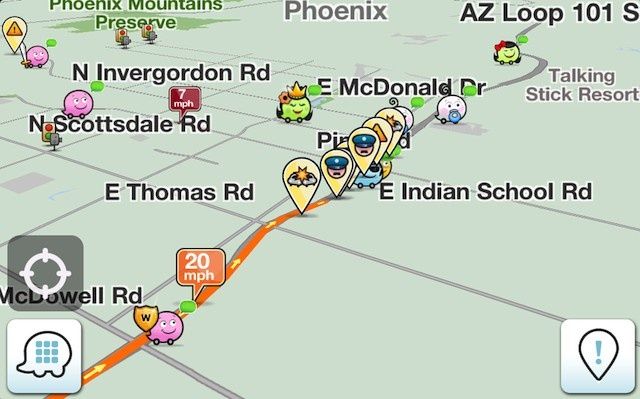 The best part about Waze is that it tries to make driving more like a game. It wants you to get from point A to point B as fast as legally possible, but because of traffic, accidents, and road construction, the fastest route changes everyday. Waze uses real-time user data to let you know the fastest routes. Users can report when they see an accident, police, hazard, or traffic camera and earn points. The app automatically detects when you’ve slowed down in traffic and updates their database with your information.

The frustrating thing about Waze is the viewing angle of the maps. Rather than a top down view, you look at your area at an angle kind of like on Apple’s 3D flyover view, except there’s no 3D buildings. The turn-by-turn navigation on Waze works better than most. It’s a fun app that doesn’t seem to take itself too seriously, but that’s also its flaw.

The entire app looks a little bit too cartoony for us to want to use it everyday as our dedicated maps app. It’s a great way to find the fastest route to work, but not a great way to explore a new city and find interesting places.

Verdict: Best Mapping App To Get You There Ontime 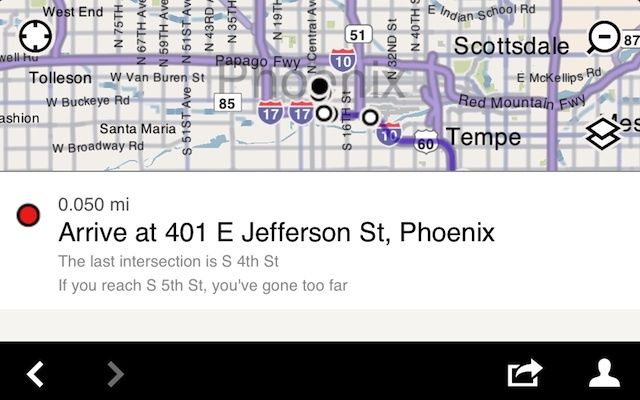 A lot of people really love Bing Maps and think that it’s one of the best Google Maps alternatives available, but to be honest we kind of hate it. Our biggest gripe with Bing Maps is that it just looks ugly and confusing. When you get directions to a location half the screen space is occupied with a textual guide while the other half is a small map, and there’s no way to enlarge either option.

The actual maps themselves look like something created in the late 90’s while the app’s UI looks clean and modern, makes for an odd mixture that we don’t particularly care for. Bing Maps doesn’t have a lot of frills. There’s no turn-by-turn navigation but they do have transit data. There’s really no compelling reason to use Bing Maps over any of the alternatives because it doesn’t have a killer feature or impressive interface that makes you want to use it. 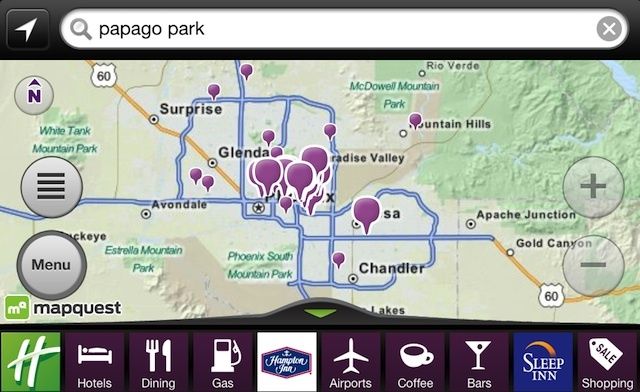 Before Google Maps became everyone’s go-to mapping solution, there was MapQuest. The mapping company is still going strong and their app is pretty solid and packed with a lot of features. It’s got turn-by-turn voice navigation and traffic data. It also has a bar at the bottom of the app that you can use to reveal nearby hotels, restaurants, gas stations, bars, shopping malls, theaters, and much more. Other apps have something similar to this, but with MapQuest it’s so easily accessible that we think they have the best implementation.

Searching for general locations like “Chase Field” or “Papago Park” on MapQuest doesn’t bring up the specific location you’re looking like it would on Google Maps or even Apple Maps, so you’ll need specific addresses when using MapQuest or know the general location of a place. MapQuest has so much data from years in the map business that you’ll likely get the correct destination you search for. The continuous ads on MapQuest are pretty annoying, but with so many features and a huge database of information MapQuest beats most competitors. 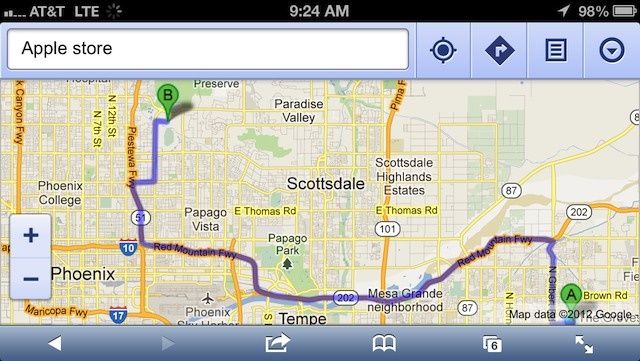 Even though the native Google Maps app is gone, that doesn’t mean you can’t get Google Maps on your iPhone. Adding Google Maps as a bookmark on your homepage works really well and you still get a lot of the same features that came with the Google Maps iOS app. Street View’s not available or turn-by-turn navigation, but it’s one of the best ways to and get public transit directions and search for locations.

The web app is actually very responsive, and even though the UI changes will take a little getting used to, the Google Maps web app should feel natural to longtime iOS users. The only problem with the Google Maps web app is that it’s a web app and you’ll have to have a strong cellular or wi-fi connection to use it, so it’s not ready to be your dedicated maps app until Google releases a native iOS version. 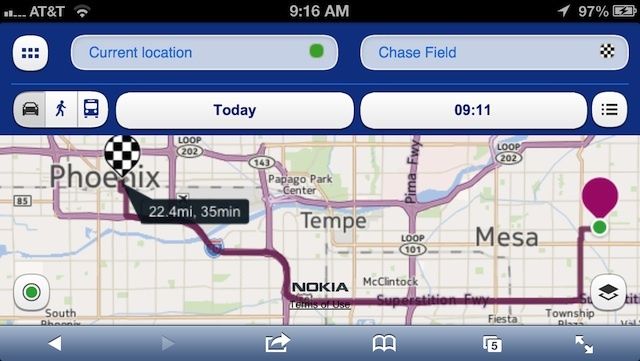 Nokia’s web maps solution puts up a great fight against Google Maps. Search on Nokia Maps works really well and the app only displays information that you need, unlike a lot of alternatives. The maps have real-time traffic data and public transit information just like Google Maps, but there’s no turn-by-turn navigation here either. The interface is clean and easy to understand, even if it’s not the prettiest of UIs we’ve seen.

Nokia’s Maps app is very basic and simple, which is actually all you really need to get from point A to point B. We think Nokia Maps might be the easiest Maps app to use for most people even if it’s UI isn’t that exciting, but it doesn’t do anything better than Google Maps.

When you look at the competition Apple Maps really don’t look that bad – apart from the horrendous amount of errors in their data. If you’re going to go with an alternative app though we’d recommend MapQuest as the best native iOS app because of the amount of information and features packed into the app. However, when you have a data connection, Google Maps web app is still probably the best overall.