Apple’s next iPhone is widely expected to feature a larger 4-inch display and slimmer form factor. While speculation has been that Apple will move to a larger display to accommodate the battery required for LTE 4G networking, exactly how Apple will implement a larger display has remained up in the air. Many seem to think that Apple will change the iPhone 5’s aspect ratio to 16:9 to match the taller display. According to new evidence found in Apple’s own iOS Simulator developer app, the iOS home screen can be scaled to fit a taller 640×1136 display with 5 rows of icons.

9to5Mac reports that, “Thanks to some tweaks to the iOS Simulator application that is included in the iOS development tools, we were able to run the simulator at the rumored next-generation iPhone display resolution of 640×1136.” Every iPhone up to this point has had a resolution of 640×960. To accommodate the taller screen size, iOS 6 adds an extra row of app icons to fill the display in the iOS Simulator app. This suggests that Apple has been working on such a layout, and it also lines up quite nicely with the rumors surrounding the iPhone 5’s larger display. 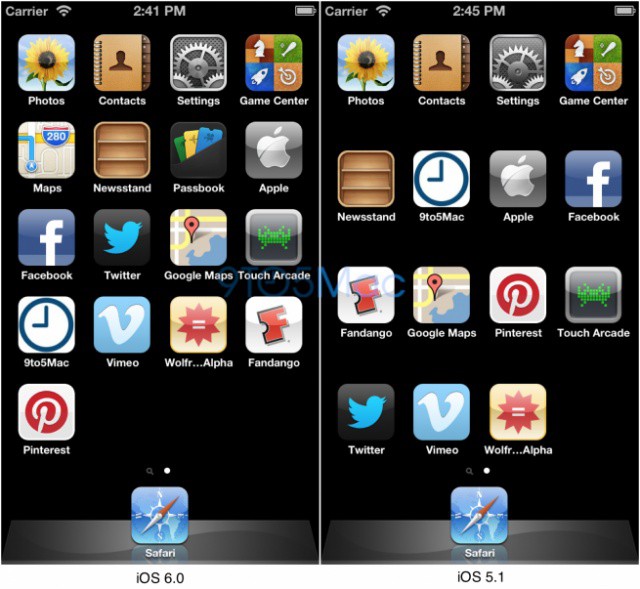 Perhaps even more interesting is that the simulator will not correctly display five rows of icons at resolutions other than 640 x 1136,” notes 9to5Mac. “At other resolutions, the icons will scale to an iPad-like home screen layout, not at the proportions and spacing of the current iPhone and iPod touch display.”

Leaked photos of what is allegedly the iPhone 5 depict a taller and slimmer form factor. Many apps would assumedly have to be tweaked to fit the new resolution properly, but the transition to the 16:9 aspect ratio in the next iPhone shouldn’t be any harsher than when Apple moved to Retina resolution in the iPhone 4.

Apple is expected to unveil the next iPhone to the world on September 12th.