It appears that Apple has started seeding iOS 6 beta 4 (build 10A5376e) to developers as an over-the-air update. Beta 3 was released about 3 weeks ago in the Dev Center. iOS 6 will power the next iPhone, rumored 7-inch iPad, and iPod touch when it is released to the public this fall.

Update: Beta 4 is now available in the Dev Center. A developer update has also been released for Xcode and the Apple TV: 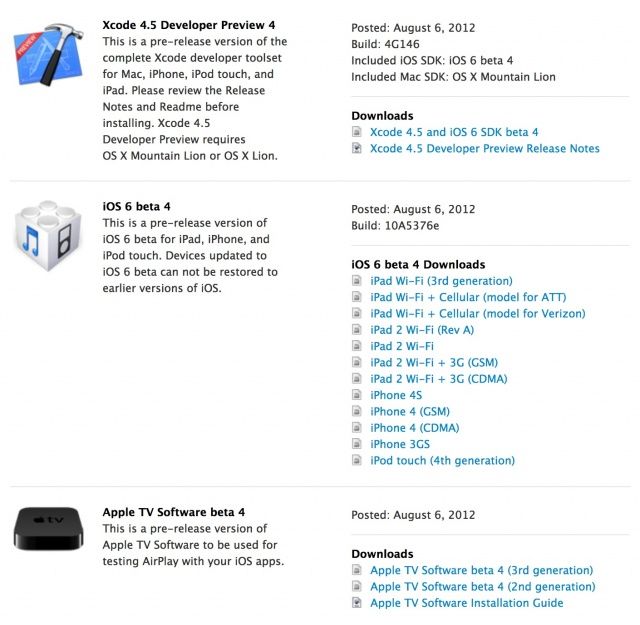 Update 2: It doesn’t look like there’s much to this beta besides the usual bug fixes. There are some big fixes for the Apple TV, including an issue where the software would show the wrong resolution and some issues with the system restarting randomly.

If Apple’s next media event is indeed happening on September 12th, we expect to see maybe one or two more iOS 6 betas before the final GM release.

Update 4: Apple has removed the stock YouTube app in beta 4, and Google is working on a new version of the app for the App Store. Bluetooth Sharing settings have also been spotted.

Those of you who have (or are) updating to beta 4, let us know any new changes you spot: news@cultofmac.com

Number of comments on this postLeave a comment
Posted in: News Tagged: iOS 6, iOS 6 beta