More juicy tidbits keep surfacing in the Apple vs. Samsung patent trial. We’ve already seen dozens and dozens of early iPhone and iPad prototypes, and we all learned that Apple literally designs products around a kitchen table. A new finding reveals that Apple had “strong interest” in curved glass for the original iPhone, but the idea was shelved because it would have costed too much to make at the time.

Former Apple Industrial Design Creative Lead Douglas Satzger left Apple in 2008 after working on the first three models of the iPhone. Network World found some interesting info in Satzger’s deposition for the Apple vs. Samsung case, namely that “shaped glass” was considered for Apple’s smartphone. 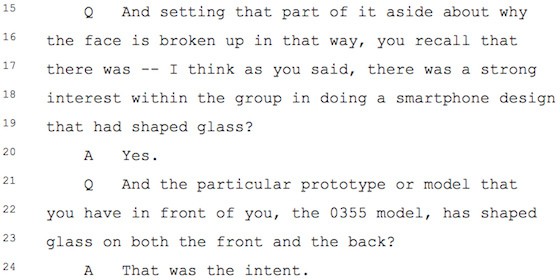 Many smartphone makers, including Google and Samsung, have put out phones with curved glass, like the Nexus S. Rumors say that Apple’s next iPhone will be larger (4 inches) and thinner, but alas, no curved glass.