Pad&Quill’s Littlest Black Book case was announced back on April 1st, and it still seems like a joke. However, I have one next to my keyboard as I type this and it is very real. And very, very cute.

The case is the smallest in Pad&Quill’s Molekine-y range of cases for the iPad and iPhone. Like the other cases, it consists of a baltic birch frame encased in a bookbindery book cover, complete with a red fabric lining and even a tiny ribbon bookmark.

All the ports are free (the iPod Nano within is clamped firmly by its two sides), and there is a cutout to fit the now vestigial clip. 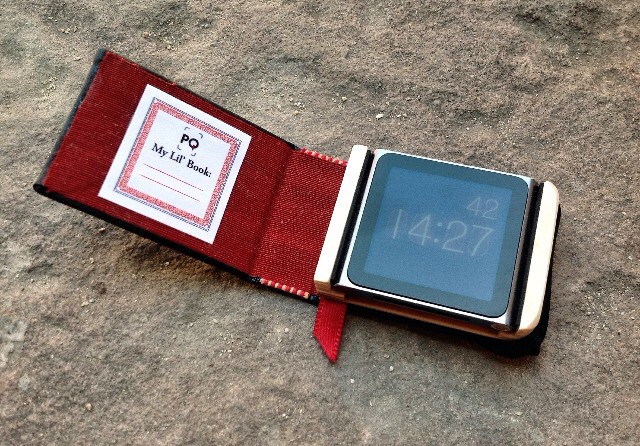 Pretty much everything. Not only will the Littlest Black Book put a smile on the face of anyone who sees it, it also makes the Nano a lot easier to use.

When closed, the case does a fine job of protecting the screen. Yes, it doubles the thickness of the naked iPod, but who cares? It’s too small to begin with.

Once opened (done by un-hitching the elastic strap), you now have something to grip other than the iPod itself. It’s a curious fact that – tiny as it is – the current Nano is a two-handed device. It is almost impossible to use the touch screen and hold it at the same time. No wonder those watch-strap cases are so popular.

With the Pad&Quill case in place, though, it works more like a (miniature) classic Star Trek communicator. You can cradle it in your fingers and thumb away at the screen, or you can grip the front cover between fingers and palm and then use the thumb. Either method feels more secure than using the bare Nano one-handed.

The case also feels very safe. While you could probably drop an iPad inside a Pad&Quill case and come off without any damage, this tiny case feels like you could throw it against the wall or floor and not have to worry. It also makes for a decent disguise, although here the size works against it somewhat – who’s going to believe you carry such a tiny notebook?

The only complaints I have are down the the elastic strap which holds the case closed. It does its job fine, but obscures the iPod’s unlock button (which gets used a lot when you double-tap to play/pause). The good news is that you can still use the button through the strap, but that might be annoying for picky princesses.

Round the other side the strap sits inside the headphone socket. This means that the case can’t be opened if headphones are plugged in.

I love it. It seems absurd to put a case on the Nano, with its pocket-friendly size and handy clip, but this one works so well I would use it all the time. Even The Lady, forever skeptical of the widgets and gadgets that constantly turn up at our door, likes the thing, and actually uses it. And there probably isn’t any higher praise than that. $35.