One of the first things about the iPad that caught people’s attention was the touch screen, and it goes without saying that some of the first apps to start taking advantage of that touch screen were handwriting/note taking apps. Apps that let you write, draw, sketch—-and sometimes type–notes on your iPad. Something that combined technology with the age-old practice of scribbling notes on paper.

Since there are so many apps to choose from, and I’ve tried virtually all of them over the past couple years, I thought I’d give you a jump start on switching to virtual paper with my top 5 favourite note taking apps. 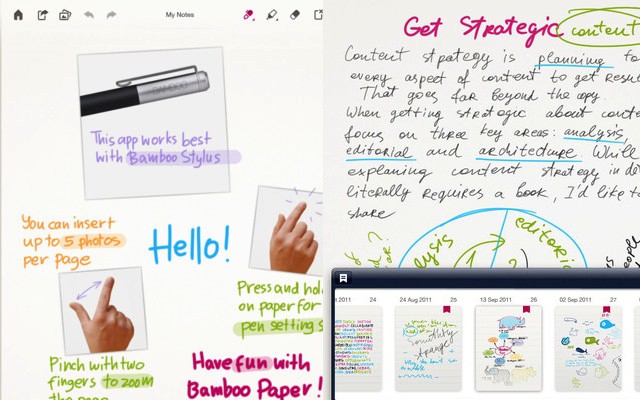 I had a hard time picking a good free app. My top three contenders were Bamboo Paper, Moleskine, and Inkflow. In the end I had to go with Bamboo Paper. Yes, sharing and such are limited with unless you upgrade ($1.99), but if you want to see what use you can get out of a note taking app, Bamboo Paper is a good place to begin. It is simple and straightforward, but thanks to Wacom’s huge experience in making tablets, the writing engine is smooth and fast. Spending a couple bucks will get you multiple notebooks, notebook sharing and cloud archiving. 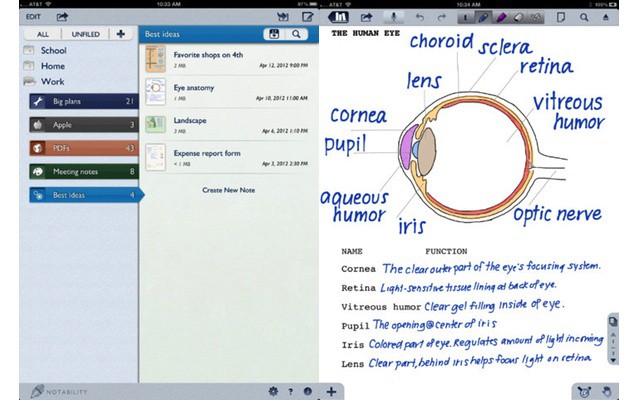 For $0.99 you have two great options in Penultimate and Notability (Notability is “on sale”, but I think it’s going to stay at $0.99 for a while). While Penultimate is a strong contender, Notability has an awesome zoom mode which lets you write in large letters and then shrinks them down. It also sports audio notes, great sharing and backup options (like auto backup to Dropbox), and stellar notebook organization. It is also easy to go from typing to sketching to adding an image to your page.

Also — and this is the only app that I’ve found with this –pages flow together. I don’t know why all notebook apps don’t do this: Really, it’s virtual paper so why can’t it just scroll and expand as much as you need it before you need to create a new page?

The folks at Readdle have had lots of practice making apps that let you annotate PDF files. Recently they decided to jump into the note-taking game and Remarks is, well, remarkable. I didn’t get it at first, but while working on this review I gave all my apps an equal test and Remarks tops all of them.

Sketch something? Fine. Type a note? Sure. Mark up a picture? Easy. Bring in a PDF file and draw on it just like you would if it was a piece of paper? Yeah, totally. I also appreciate the left-handed mode (I’m a leftie) for writing. Setting up automatic Dropbox syncing is a great way to take notes in a meeting and have backup copies be made as you work. In all, pretty slick.

Paper is an app that we really like. Paper isn’t really intended as a note taking app, but I included it here because the pen tool that you can buy through an in app purchase is a really nice writing tool. As our own Giles Turnbull said in his review, there is plenty of room for Paper as well as “real” note taking apps, but I think it’s nice to have something on your iPad that is just there to let your creativity come out. I’ve found that I really like sketching with Paper and — it turns out — I’m not that bad at it either!

*With in app purchases for more features. 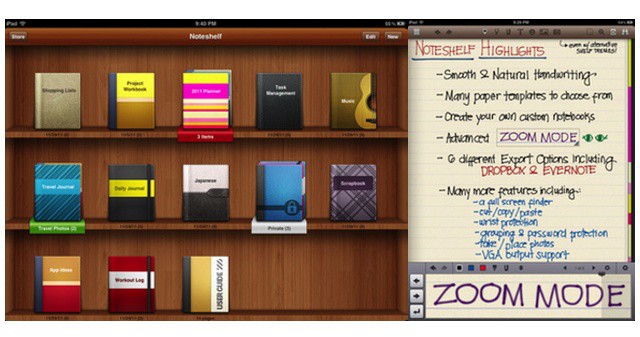 Lots of people rave about Noteshelf, and I can’t really fault them. Noteshelf is a nice note taking app with lots of great features, but for this review the one that stands out for me is how well (and cleverly) you can organize your notebooks: once in editing mode, you can drag books onto each other to make stacks, and you can even put a notebook-level passcode on them. There’s also a zoom-mode with automatic carriage return and an in-app stationery store where you can buy new papers and covers.

The one big gap in Noteshelf is that — unlike all the other apps here — Noteshelf hasn’t yet been updated for Retina graphics, so the handwriting looks rough compared to all these other Retina-ready apps.

I’m hard-pressed to pick just one app to recommend to people, but if I had to make the call I’d pick Notability and Paper. If you work with a lot of PDF files and you need something more than just a basic app to annotate the files, then Remarks is a worthy app. Personally, Remarks has replaced Notability on my homescreen because I’m growing to like the “notebook/folder” scheme of organizing things. Also, the ability to pull in more than just images and text into notes is pretty cool, as is syncing with Dropbox.

Also, if you want to get serious about writing on your iPad, check out reviews editor Charlie Sorrel’s post detailing his Five Favorite iPad Text Editors.