Take a look at your desk. Now, find a cable. Chances are that it is tangled up with another cable, and even if it isn’t, then it is probably tied to itself in knots. What if you had a set of commonly used cables that were impossible to tangle? Aviiq’s Ready Clips will provide you with this courtesy, and they throw in pen-like clips to sweeten the deal.

The Ready Clips are great looking, and color coded so you can pick the right one at a glance. This isn’t necessary when picking between the 30-pin dock connector and a microUSB adapter, as the difference is pretty obvious, but when distinguishing between two different microUSB cables, it’s a lot more handy.

The clips, too, are neat, and while you won’t clip them to your shirt pocket, you might use them to organize the cables in a travel bag.

And the cables them selves are stiff: it’s actually king of neat to use one to charge an iPod touch with Apple’s standard iPad charger and watch the iPod almost stay upright on the end of the strip.

Aviiq’s products are usually crazy-well put together, but the Ready Clips feel cheap. The thick, hard plastic end sections are great, but the join between them and the flexible center strip is terrible. Maybe it’s supposed to bend away and split open at the join, but when the plastic stretches enough that you can see through it to the colored wires inside, I start to worry.

The cables are also big. Not big enough to stretch comfortably from the ports on the back of my iMac, but much bigger than the stubby little Griffin cables I bought myself and use on every trip I take (and pictured here with the Aviiqs). The Griffins are tiny, tough and (so far) long lasting. The Ready Clips feel like they’re ready to break. 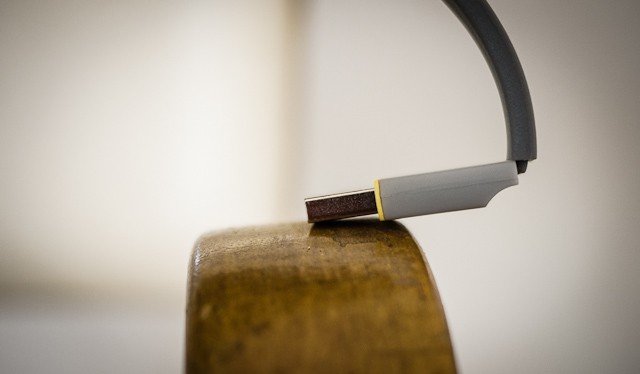 The Aviiqs come in various combinations, running from $20 for two USB cables to $30 for two Apple 30-pin dock connector cables. Compare this to the Griffins, which are better made, smaller, and cheaper at as little as $10 for a set of three. I know which I’d pick.