The Mac has had a vibrant, growing community of developers for many years, and Apple has continued to encourage third-party developer participation with the Mac App Store. Launched in January of 2011, the Mac App Store already boasts 10,000 apps. It’s easier then ever for developers to get their apps in front of millions of OS X users. But what if you don’t want to play by Apple’s rules? Or what you if you want your app to be seen by as many eyes as possible? Then you start to look outside the Mac App Store.

While Apple’s is great in its own ways, other storefronts are offering different —and in many ways better — experiences for app distribution and discovery. In fact, there’s a certain Mac app out there that’s been doing it well for a long time.

Robert Piché and Dave Poirier work at Freshcode, the Canadian app firm behind Bodega. Piché is the co-founder and current director of Freshcode, while Poirier serves as the senior developer and architect. Since March of 2010, Freshcode has been creating a quality storefront for third-party OS X apps, plugins, games and widgets. If it can be packed into a .dmg file and it’s a quality app, Bodega will display it proudly. Developers usually want their apps in front of as many people as possible, and Bodega has been growing over the years into a formidable Mac App Store alternative.

Projects like the HackStore have aimed to address the desire for a “Cydia for Mac” application. In the same way that Cydia on a jailbroken iPhone opens up the possibility to find and install apps Apple wouldn’t approve for the App Store, certain users want a non-Apple affiliated store for OS X. Apple’s restrictions keep certain kinds of apps and plugins out of the Mac App Store, so developers often have to rely on their own marketing to get their apps out there.

Cydia creator Jay Freeman told Cult of Mac that “Bodega’s existence is the reason why you won’t see me bother releasing a Cydia for Mac.” Why? Because Freeman is concerned with a fundamental change in the way software is written for the Mac, not merely packaging existing apps and displaying them in a store. “The interesting challenge is not “distribute applications,” said Freeman. “There’s already a perfectly reasonable and well-worn way to do that: Bodega.”

Bodega was around long before the Mac App Store. Freshcode launched the app’s beta in March of 2010. Apple didn’t release the Mac App Store until nearly a year later. “There was no Mac App Store at the time, and we just wanted there to be an ‘app store’ period,” said Poirier. “Most of the apps we added two years ago are still there, which is a good sign.” 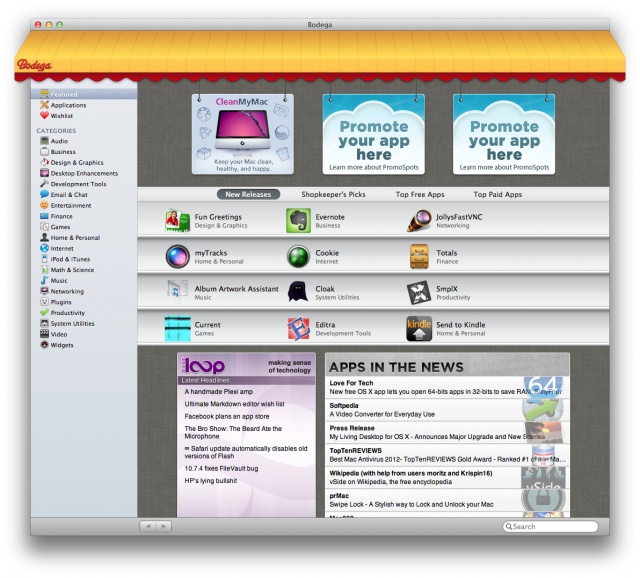 Any Mac app enthusiast should download Bodega because the store really is a treasure trove of useful and interesting gems. There are plenty of apps in Bodgea, like CleanMyMac, Dropbox and Adium, that you won’t find in the Mac App Store, but there are also shared titles like Evernote. If an app doesn’t fit into Apple’s guidelines, it won’t make it into the Mac App Store. “Apple has some pretty tight constrains,” Piché said. “A dev could have a lot of things he wants his app to do, so the Mac App Store is not an option. Then they would come to us.” 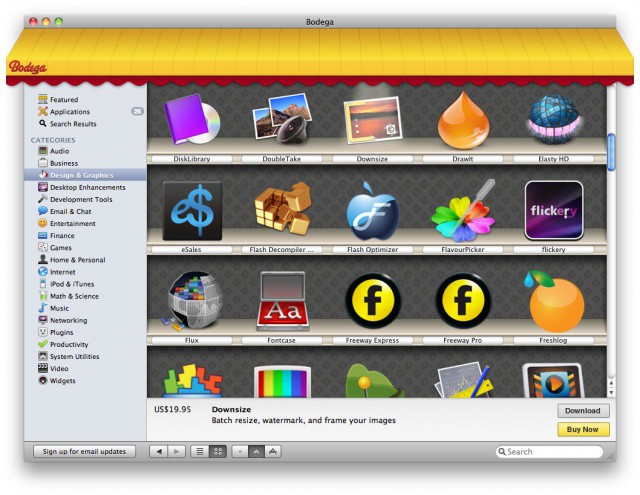 Bodega is divided into 20 app categories and a Featured section.”We don’t curate, but the community standard we have ensures that the apps are quality,” Poirier told Cult of Mac. The Featured marquee displays new additions, Shopkeeper’s Picks, and the top free/paid apps. You can search for apps in the bottom right corner of Bodega or browse by category. There are more niche sections, like Plugins, for app add-ons and such. Spend about 10 minutes in Bodega and you’ll find great apps you didn’t know existed, and that’s due to the great indie dev community the guys at Freshcode have continued to foster. “We try to mingle as little as possible with the app listings,” Poirier said. “We want the apps to speak for themselves.” 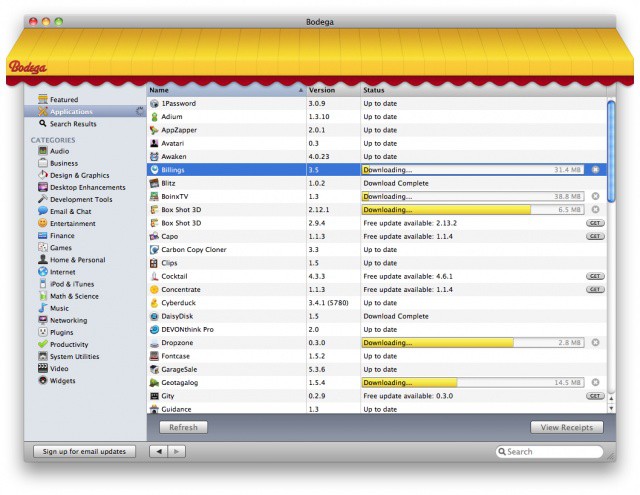 Bodega also scans your Mac for app updates. All of your updates are displayed in one convenient place. If an app is in Bodega’s database or comes with Sparkle updating, it will show up automatically in the Applications section of Bodega. This feature has been a staple part of Bodega since the beginning, and it serves its purpose well for OS X users who install a lot of apps. 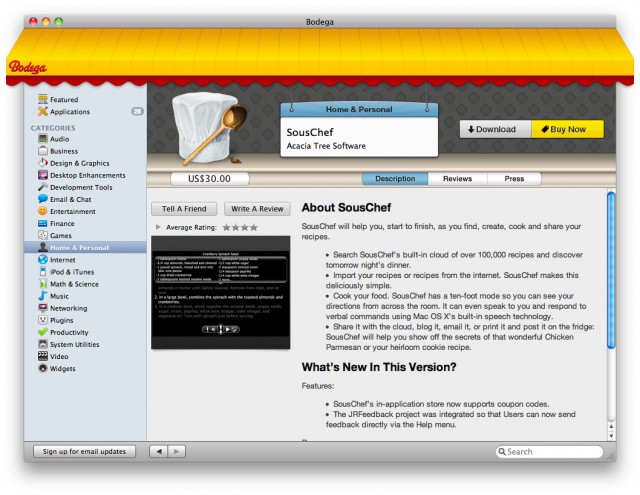 Freshcode’s store isn’t actually hosting app binaries, just the listings. All titles are linked to their associated developers’ servers. That way devs can keep track of downloads and serve their apps the way they see fit. There are several pros to Bodega from a developer’s standpoint, including the following:

Unlike the Mac App Store, Bodega has a wish list for keeping track of paid apps you want to buy later. There are screenshots for apps, developer info, customer reviews, and other Apple-like aspects of Bodega that make the shopping experience familiar. You can download Bodega for free from Freshcode’s website.

Will there continue to be room for two Mac app stores?

If there’s anything Bodega got wrong from the very beginning, it’s marketing. Many Mac users don’t know the app exists. That hasn’t kept Freshcode from growing apathetic, however. Although they declined to give exact numbers, Piché and Poirier indicated that Bodega has a formidable and growing user base. The company also declined to comment on future plans for Bodega, although Piché did say that new features are in the works. Now that the Mac App Store is on the block, Freshcode is figuring out how to continue merging the app store and discovery models the right way.

“With our user base and collection of apps growing, we want to kick it up a notch.”