I picked up my first iPhone around three months after the device launched way back in 2007, and I’ve been an iPhone user ever since. I’ve dabbled with Android devices throughout the years, and I even tried webOS on the HP Pre, but I didn’t like either operating system as much as I like iOS on the iPhone.

When Microsoft first introduced Windows Phone, I was instantly attracted to it. I liked the look of the user interface, I liked the way the system worked, and I actually liked the fact that Microsoft was in control of the Windows Phone Marketplace. (One of the things that I dislike most about Android is that the Android Market has no approval process.) I’m not a fan of the Windows desktop operating system, and I’ve stayed as far away from it as possible after purchasing my first Mac. But I felt compelled to try Windows Phone.

So I did. I swapped my iPhone for a HTC TITAN running Windows Phone Mango for one month. Here’s how I got on.

The thing that attracted me to Windows Phone most was the operating system itself. It’s clean, it’s simple, and it’s very well designed. Microsoft clearly thought about user experiencing when designing Windows Phone, which isn’t something you can say the company takes into account with all of its products. It works very well, and although it doesn’t yet support dual-core processors, it’s incredibly smooth and snappy — at least on the TITAN.

Windows Phone’s simplicity makes it very easy to use. Much of its navigation is gesture based. There are few tab bars like those that loiter at the bottom of most iOS apps. Instead, you simply swipe between the different pages of your apps to navigate them. It’s plain and intuitive and something that very quickly becomes second nature.

The Live Tiles, which offer real-time information right on your home screen, is one feature I missed most when I switched back to my iPhone. They’re very useful, especially when displaying real-time information like the weather, and it seems silly that you have to open an app or pull down your Notification Center to access simple data like this in iOS.

Another feature I love about Windows Phone is its social network integration. Link your device to your Facebook account and when you open the Pictures app, not only will you see the images you’ve taken yourself, but also those uploaded to Facebook by your friends.

Media syncing on a Mac using the Windows Phone 7 Connector is simple and hassle-free. Sure, it’s nowhere near as easy as using iTunes with an iOS device, but it’s still a very pleasant experience. The application uses your iTunes library for syncing music, movies, podcasts, and TV shows, so you don’t need to fiddle around with syncing them manually. Simply check the boxes next to the media you want and hit sync. 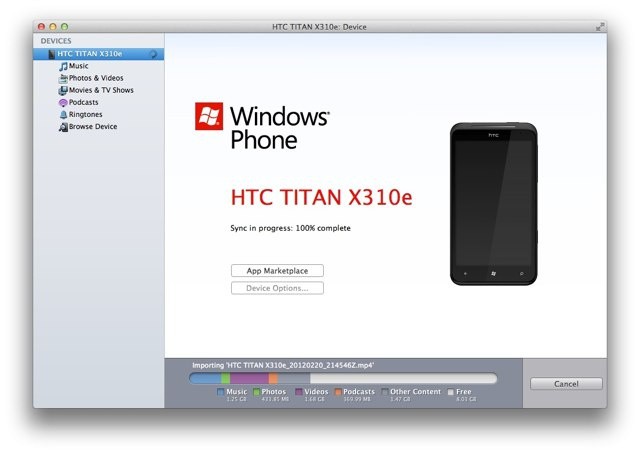 The Windows Phone Marketplace is where the operating system both succeeds and fails all at once. Let’s talk about its successes first. Like most Windows Phone apps, it’s well designed and simple to navigate, making it quick and easy to find and install the apps you want. And like Apple’s App Store, Microsoft’s uses a strict approval process for regulating third-party software.

That means that you can download apps safe in the knowledge that they’ll work as advertised once installed, and they don’t just crash each time you open them, which is especially important when you’re spending your hard-earned cash on them.

And now we come to the Marketplace’s failings, which, I have to say, isn’t really its own fault. The thing is, the Windows Phone Marketplace doesn’t offer enough apps. Let’s take Twitter clients, for example. On iOS there are dozens of Twitter apps, a handful of which are truly great. On Windows Phone, there’s an official Twitter app, which is just about bearable, and probably one half-decent third-party app. I couldn’t find a great Twitter app — like Tweetbot or Echofon — for Windows Phone.

And the same can be said about third-party web browsers, task management apps, photography apps, news readers… the list goes on. Sure, they’re not all poor, but there aren’t enough that stand out, and that’s a real issue if you’re coming from an iPhone.

If a Windows Phone device is your first smartphone, this probably won’t be an issue. But if you’re used to an iPhone and Apple’s App Store, and you not rely on having “an app for that,” you’ll really struggle to get used to the lack of apps for Windows Phone.

You’ll also struggle with the lack of a Notification Center. This is something we cried out for in iOS, and it’s difficult to deal with life without it. On Windows Phone, notifications almost disappear if you don’t action them, just like they did in iOS 4. There’s no way of viewing all of your alerts in one place.

And there are no lock screen notifications, either. You get simple icons that alert you to missed calls, emails, or text messages, but you cannot see them or interact with them without unlocking your device. That’s a shame, because the Windows Phone lock screen is actually pretty great, and it leaves plenty of room for things like notifications.

My final gripe with Windows Phone is a small one, but I’m sure it will annoy you as much as it annoys me. Windows Phone has no status bar like the iPhone. You get the time displayed in the top corner, but that’s it. To see your battery life, signal status and more, you have to swipe down from the top of the screen to display it for a few seconds, before it disappears again. I don’t understand why these things are just displayed all the time.

Windows Phone was as good, if not better, than I expected it to be. This truly is a great mobile operating system, and if I was forced to choose between Windows Phone and Android, Microsoft’s offering would win my vote any day.

But I’ve been spoiled by iOS. Its thriving App Store, its home screen folders, its Notification Center, and its compatibility with the Mac are just a few of the things I sorely miss when I attempt to get by with another device, and they’re the reason why rival operating systems like Windows Phone just can’t compete when you’re used to an iPhone.

I’ve heard iPhone users complaining that Apple’s device doesn’t feature a larger display, or a 12-megapixel camera, or a micro SD card slot, or 4G LTE connectivity, or some of the other things you’ll find in rival devices. But when you sacrifice iOS and the App Store for these things, you realize that it’s not all about hardware.

I think that in time, Windows Phone will catch up — at least in terms of support from third-party developers. But until then, an iPhone user who’s happy with iOS would be crazy to drop it for a Windows Phone handset.