Apple is expected to announced the iPad 3 to the world in less than two weeks. If you’ve been thinking about selling your current iPad in time to upgrade, the clock is ticking. Now is the best time to trade in your current Apple tablet for a shiny new one next month.

Popular online reCommerce service Gazelle affirms that “the best time to trade is now.” Gazelle.com will buy your used gadgets for cash or credit and resell or recycle them. It’s one of the easiest ways to get money for the tech lying around your house, including the original iPad and the iPad 2.

“We’ve seen a 400% increase over the past few weeks in iPad trades and now is the best time to trade-in your iPad,” Gazelle Chief Gadget Officer Anthony Scarsella told Cult of Mac. “Prices for iPads have just started to decline since the news of a forthcoming iPad 3 from Apple nears. Also, with an expected price cut on the iPad 2, trade-in prices will continue to decrease heading into the rumored announcement on March 7th.”

Gazelle offers a 30-day price guarantee for the quote you’re given when you submit your iPad for resale. This means you can hold on to your current iPad until you actually get your hands on the next-gen device. Your offer includes free shipping and a box to send your tablet to Gazelle. As far as your window of opportunity goes, we were told by Scarsella that iPad price offers “should stay steady heading into the launch but will quickly start to downward spiral soon after the announcement.” Essentially, the sooner you trade, the better off you’ll be.

Of course, there are many other ways to sell your used iPad. Although it’s on the decline, eBay has been a popular way to sell used gadgets. Another reCommerce service called NextWorth provided us with the following graph depicting the fluctuation in selling prices for the original iPad when the iPad 2 debuted: 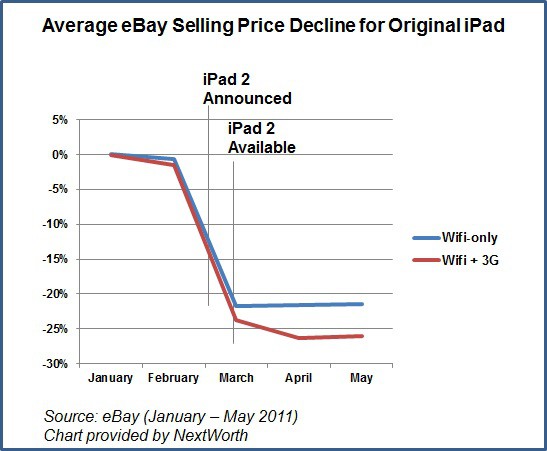 “We’ve already seen a 400 percent increase in traffic, and in the volume of orders from iPads in the past week. Unlike a phone, people can live without a tablet for a few days, so people are more likely turn them in earlier for higher prices,” said Jeff Trachsel, Chief Marketing Officer for NextWorth.

To get an idea of what to expect from a reseller, Gazelle is currently offering $240 for a 32GB WiFi-only iPad 2 in good condition. Quotes will only decrease as Apple’s rumored announcement approaches. 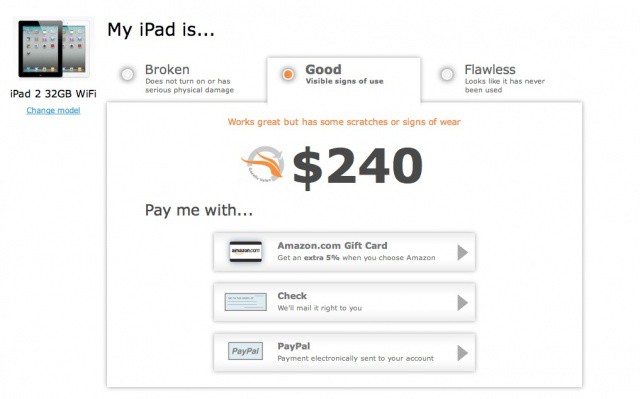 If you’re not keen on selling through Gazelle or NextWorth, you can always try your luck at Craigslist. There’s sure to be a few people out there who have no idea that a new iPad is on its way.

Amazon will take a 32GB WiFi-only iPad 2 in good condition for about $360, but you’ll have to factor in the price and inconvenience of shipping and handling. You’ll get an Amazon gift card in return for your trade-in.

RadioShack offers a pretty lucrative trade-in program for the iPad that you can take advantage of. You can make about $320 for a 32GB WiFi-only iPad 2, and the great thing is you don’t have to ship anything or deal with an annoying auction. Simply visit your local RadioShack (you may want to double check that the location accepts trade-ins) and drop your iPad off for cash.

There’s plenty of options for selling your current iPad, but the key is that you do it soon. You want to make sure you get the best resale value possible by including all the cables and packaging that came with the iPad. Let us know if you have any other tips or suggestions in the comments!