We’ve seen plenty of jailbreak tweaks for enhancing Siri, but a new one called MyAssistant offers more features than any of its predecessors. Developed by Andrea Oliva and Saltb0x, MyAssistant is available for $0.99 in Cydia. You will need a jailbroken iPhone 4S or Siri-hacked iOS device to run MyAssistant.

With this new tweak you can tell your iPhone to reboot, lock, take a picture, get lyrics for a song, give you its battery percentage, and more. You can also customize the look of the Siri UI and create custom conversations with Apple’s digital assistant. 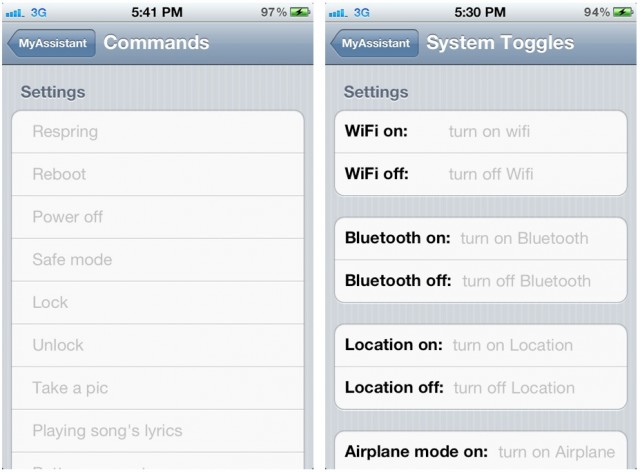 Like AssistantExtensions and other similar tweaks, MyAssistant lets you open any app on your iPhone with your voice. This option can be found at the bottom of the Command panel in the MyAssistant Settings under “Open apps.” You have 10 apps to open with a custom voice command, so you can set “Open Twitter” to open the Tweetbot app, for instance. 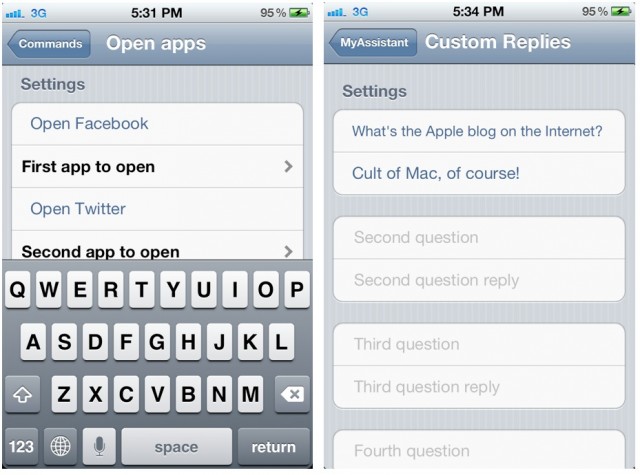 There are plenty of system toggles and commands that can be customized with MyAssistant, including the ability to toggle WiFi, brightness, volume, and Location Services. MyAssistant also uses Activator (a jailbreak app we’ve highlighted before) to let you perform other system-level events with Siri. The Custom Replies feature of MyAssistant lets you add up to 10 lines of custom Siri dialog Siri for kicks. You can also use photos from your device’s Camera Roll to customize Siri’s background as well.

If you already use other Siri tweaks that overlap with MyAssistant, like AssistantExtensions’ ability to open third-party apps, I recommend uninstalling them so as not to conflict with MyAssistant. I couldn’t get the Custom Replies feature in MyAssistant to work quite right, but the tweak is a work in progress that will hopefully be improved with future updates. In the meantime, let us all know what you think of MyAssistant in the comments!