LAS VEGAS, NEVADA — Intel talked a lot at their press conference today about ways PC makers could take the ultabook form factor and distinguish it from the juggernaut that is the MacBook Air, but perhaps the most interesting concept of just what a MacBook Air-killing ultrabook would look like was the Nikiski, a hybrid ultrabook that looks like it just leaped straight from a sci-fi concept design.

Why would you want that? The idea is to give the Nikiski some tablet-like abilities when closed, thanks to integration with Windows 8. Because the trackpad of the Nikiski responds to touch on both sides, when the laptop is closed, a swipe will open Windows 8’s tablet, Metro UI, allowing you to check your email, the weather, stocks, even browse while in closed, low-power mode.

Right now, Nikiski’s just a concept, but Intel expects to work with partners this year to make it a reality. Our verdict? The Nikiski’s neat, but it’s a total gimmick, and Intel knows it. Steve Jobs would have called it a “tweener,” and he’d be right. The Nikiski is a MacBook Air that wants to be half an iPad. 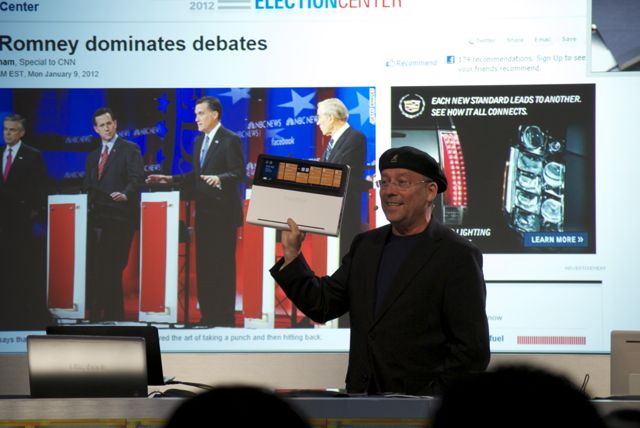