Apple’s flagship store on Fifth Avenue in New York City is a beautiful piece of architecture, with its shining glass exterior and 20,000 square feet of underground retail space. The giant Apple logo suspended midair in glass is an unmistakable landmark for daily commuters and tourists alike.

Apple started renovating its Fifth Avenue store last summer. The $6.6 million project focuses on upgrading the plaza and iconic glass cube that stands on top of the retail space.

Back when Apple originally started construction, it was unclear as to what would be done to the glass cube’s design. The barrier that Apple put up around the glass cube left much room for speculation. Apple re-routed customers through a covered passageway that led to the store’s entrance.

A new sign has been posted on the barrier surrounding the Apple store’s glass construct, and it has been revealed that Apple will completely replace the glass cube with larger, “seamless” glass panels. 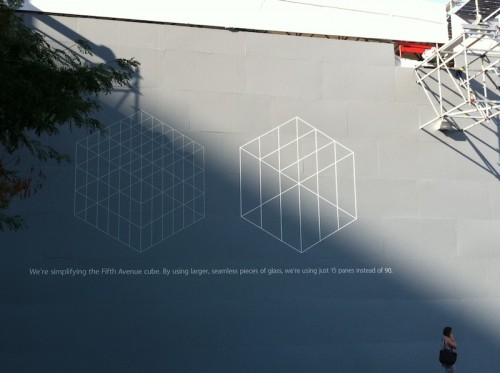 The new diagram reveals that the glass cube will have three panes of glass on each side, with each pane stretching the full length of the cube. Pretty slick.

This redesign is part of what some are calling the Apple store ‘2.0’ initiative, with Apple looking to revamp and invest more in its retail locations around the world. The addition of iPad Smart Signs could be seen as part of this plan, while Apple is also looking to open more flagship locations, like the upcoming store in Grand Central Station.