The new SportWatch GPS offers Nike+ functionality without the need for an iPod or iPhone. There’s lots to like about Nike’s latest toy, but early teething trouble combined with poor GPS accuracy are currently letting it down.

Nike’s new SportWatch is an important step in the evolution of Nike+, the runners’ tracking system that started life as a joint venture with Apple. In the beginning Nike+ enabled an iPod nano to communicate with a sensor in a Nike running shoe to track your distance, pace and calories as you run, listening to music. Today, Nike+ has multiplied into a rich and varied ecosystem, offering many new features, including GPS mapping and a heart rate monitor. The Nike+ SportWatch is the first product to consolidate these into a single solution. In fact there are just two things are missing from the SportWatch: music and Apple. 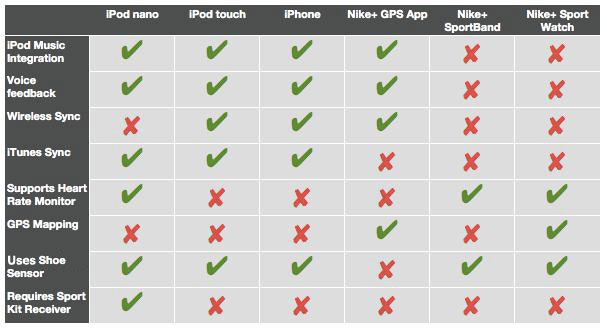 The only trace of involvement from Apple in this product is their logo on the shoe sensor. Otherwise, it is all the work of Nike, and their new GPS partners, TomTom. It’s not the first time Nike have chosen to part company with Cupertino. The Nike+ SportBand and the Nike+ GPS iPhone app* were also developed without Apple. A fact that prompted me to speculate about an Apple/Nike fallout in a previous post.

So how does this new addition to the Nike+ ecosystem measure up?

Normally, I prefer to run with an iPod, but there are occasions like club runs and races where I don’t want to listen to music and for these situations, it’s handy to have a Nike+ device without headphones. In the past, I’ve used the SportBand, but this has a few shortcomings.

The SportWatch offers many significant advances over the SportBand, as you would expect, given that it is three time the price. The display is large and clear, with bright backlighting and controls that are robust and well located. The on-screen design is stylish, clean, well laid out with big text that is ideal for glancing at when you’re bounding along. Overall, it’s much easier to use than the fiddly SportBand (and indeed the buttonless new iPod nano).

Curiously, you’re expected to “tap” (which in practice appears to mean slap) the watch in order to activate the display lighting. As strange as this may seem, slapping your wrist in this way turns out to be convenient and intuitive. It is also a welcome addition that you can now use these slaps to record intervals.

The design of the watch itself is excellent. In fact, it’s the only GPS running device I’ve ever seen that anyone might seriously consider wearing as a regular watch. It’s perhaps a little on the large size, but far smaller than most competitor products; it has a nice solid build quality and the USB connector is cleverly concealed in the strap.

As a watch replacement, it is fairly basic. The feature I miss most is a stopwatch. Most runners (pro and amateur alike) will need to time more than just their own runs. For example, I like to use a stopwatch to time my rest intervals at the gym, (yes, I know that’s geeky). Hopefully this is an omission that Nike can correct in a future software update.

A unique feature of the SportWatch is the way in which it combines data from both the Nike+ shoe sensor and GPS satellite data. This combination could potentially offer the best of both worlds. The shoe sensor is great for indoors, treadmills or any time you can’t get a GPS satellite connection, while the GPS should offer greater accuracy over long distances, and provide mapping data. Nike even claims that the GPS data is used to auto-calibrate the shoe sensor – a very clever innovation for anyone who is unwilling or unable to do their own calibration at their local running track. That’s the theory, anyway. Reality, however, is disappointingly rather different.

I’ve been using the SportWatch for a couple of months now. In that time, I’ve covered about 300 miles, in a variety of locations, distances and conditions. Over that time, it has proved to be very unreliable in measuring distances – especially when GPS is enabled. 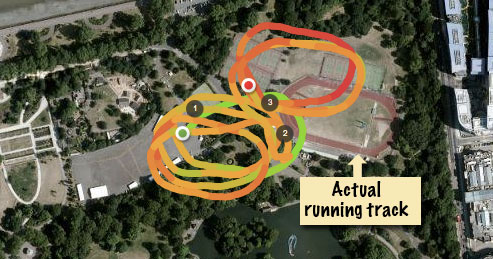 The GPS problem is best illustrated by this screengrab, which shows a recent run at my local athletics track, in which I did six laps – you’ll see there’s significant drift from one lap to the next, and most laps are shown at least a quarter mile away from the actual track, which you can see in the satellite image. It appears that most of the mapping is handled using some kind of relative positioning, presumably measuring motion and speed via the accelerometer rather than GPS – perhaps to save power. As a consequence, if the watch does not get an accurate reading at the start of the run, this error can become progressively compounded as the run continues.

Connecting to GPS can also be a problem. Sometimes I’ve had to wait for several minutes before a run to acquire a GPS signal, (the watch refers to this as “linking”). Nike appears to be aware of this problem, because they offer a “Quick Start” feature, allowing you to begin your run without GPS. They claim that GPS mapping will commence later, once the GPS link is established. But in my experience, this never happened – when I used Quick Start, I never got any subsequent GPS data.

These problems are intermittent – as you can see, this image of my London Marathon run last month is pretty accurate. Nike+ reported 43km (a marathon is 42km), but this is only 2% out, which isn’t bad at all.

When I returned my first SportWatch because of these intermittent problems, the guy in NikeTown told me that they had sold over 600 watches and I was the first to return one for accuracy problems. I’m very surprised by this, because the replacement watch had almost identical problems with GPS.

When I recently tweeted about these accuracy problems, @nikeplus responded saying “we’ll be fine-tuning the accuracy soon through software and firmware updates”. They later added that the promised updates would be coming “in the next week or two”.

The shoe sensor data is sadly also not perfect. My first watch was extremely inaccurate, routinely under-reporting distance by as much as 20%, even when GPS was disabled. The replacement watch was much better, but even with this one, on shoe sensor-only runs, I’ve noticed that after about five miles, the sensor starts sporadically cutting out, resulting in erratic pace reporting.

My final gripe is with the calorie counter, which works fine on shorter runs. But every time I’ve run further than around 12 miles, something goes wrong and it starts to underestimate calories burned. Hopefully this will also be corrected in a future software update.

If, like me, you simply must have the latest Nike+ gadget, then you’ve probably already gone out and bought one. For everyone else, my advice would be to wait a while, and see if Nike are able to resolve these issues. If they do, the Nike+ SportWatch GPS promises to be an excellent running companion – even if it doesn’t have an Apple logo on it.

* N.B. not to be confused with the Apple-developed Nike+ app that comes bundled with every iPhone but does not include GPS tracking