Wow, here’s a fantastic hack from the RetroMacCast forum, in which contributor Charles Mangin creates a new body for a Mac mini – using the body of an ancient Apple Disk ][ drive.

The drive door works, so you can open it up to slide in a DVD. The power switch is authentically mounted at the rear, and the “IN USE” light on the front flashes up when the mini is, you know, doing stuff. Superb retro-modern hackery, I love it. 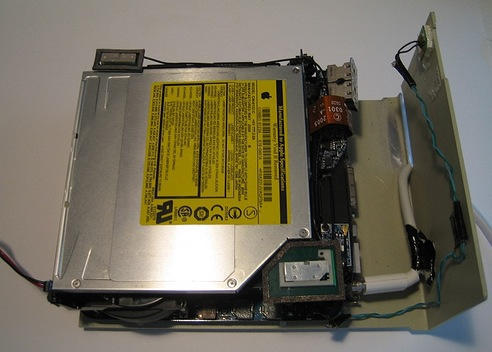 The Disk ][ was an external drive for 5¼ floppies. Released in 1978 for just shy of 500 bucks, this little beast was aimed at Apple ][ owners who wanted to upgrade from cassette tapes for storage. Those, kids, were the days. When floppies were actually floppy. And 114KB of storage per side was considered *plenty*.

Charles has got a Flickr set with more photos and details. Our thanks to him for permission to use the pics, and to James from RetroMacCast for the tip.