Even though he’s a pretty reserved and deeply private individual, Steve Jobs sure does churn out great lines every year. Here are the 10 Ten Steve Jobs Quotes of 2010

#10.    “It is not a sweatshop. You go in this place and it’s a factory but, my gosh, they’ve got restaurants and movie theaters and hospitals and swimming pools. For a factory, it’s pretty nice.” – Steve defending the conditions at FoxConn in reference to the Foxconn workers suicide scandal.

#8.      “I get a lot of email and my address is out there. I can’t reply to all of these emails — I have a day job. Some people post them on the web, which is kind of rude.” – Steve Jobs talking at the “Antennagate” Keynote, referring to the emails he received complaining about signal loss with the iPhone 4.

#7.       “I thought deeply about this. I ended up concluding that the worst thing that could possibly happen as we get big and as we get a little more influence in the world is if we change our core values and start letting it slide, I can’t do that. I’d rather quit.” – Steve Jobs responds when asked about the Gizmodo.com lost prototype fiasco, saying that many people told him he should “let it slide.”

#6.       “We never saw ourselves in a platform war with Microsoft, and maybe that’s why we lost.” – Steve Jobs at D8 when asked whether he sees competition with Google and Microsoft as a platform war.

#5.       “We did not enter the search business. They entered the phone business. Make no mistake they want to kill the iPhone. We won’t let them.” Steve at a private TownHall meeting for Apple employees a few days after announcing the iPad, talking about Google and their Android platform.

#3.       “I’m sorry about your girlfriend. Life is fragile.” – Jobs’ softer side is on display in response to a fan who emails him expressing gratitude for Jobs’ recent work on pushing a pro-organ donation bill through the California state senate. The emailer’s girlfriend recently passed away from a melanoma infection in her liver.

#2.     “My sex life is pretty good these days, Walt. How’s yours?” – Steve Jobs’ response to Walt Mossberg’s question “How’s your relationship?” at D8. Mossberg and Job’s were discussing Apple’s stance on Google.

#1.       “We’re not perfect.” – Steve Jobs apologizing to users during his speech at the Antennagate Keynote. 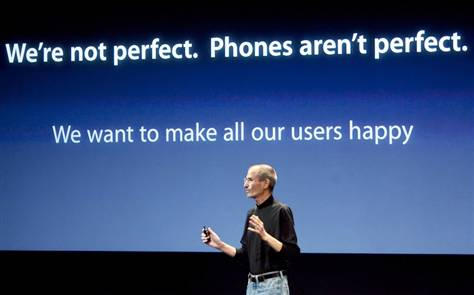