Chair and Epic Games’ Infinity Blade ($5.99) may disappoint those who looked for a direct iOS analogue to the Unreal 3 Engine’s console offerings (where first-person combat by beefcakey “Tom of Finland” style space marines often spills over into rocket-turret-mounted monster truck driving sequences) but gamers who would so miss the point are a rare breed easily descried by the government-mandated “DERP” tattoos branded into their foreheads. For the rest of us, Infinity Blade is a perfect crystallization of the iPhone’s capabilities as a cutting-edge gaming device, a paradigm shift in the way AAA developers approach multitouch interfaces, and… lest we forget… the most visually impressive and polished game on the App Store. 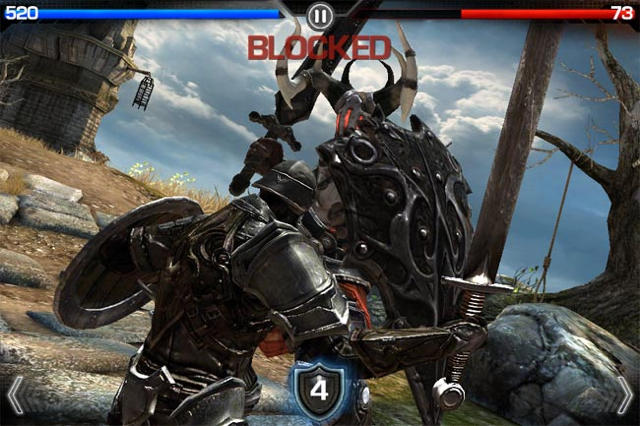 Plot-wise, Infinity Blade is a haunting, recursive dream. A beautiful but mysterious castle on a hill, ruled by a dark presence who hints at an order of things beyond which can be seen, and guarded by ogres and clockwork guardians. A silent warrior who comes with his heirloom sword and shield, looking to avenge his father’s death, only to prove the same mortal inspiration to the infant son he left at home.

It’s not much plot to speak of, but that’s because it’s not a plot: it’s an emotional state. In many ways, Infinity Blade feels similar to the games of Team Ico made for the PlayStation 2, including Ico and Shadow of the Colossus: games that are palpably more dream-like in both feel and logic than traditional plot.

Whether Team Ico’s games are actual inspirations, or the haunting and semi-dirgelike feel of Infinity Blade is a consequence of its focused, replayability-oriented game mechanics, who can say? They are perfectly complimentary to the latter, though. Infinity Blade is not a game that is meant to be beaten in one sitting, but played over and over again. You advance, screen by screen, through a small castle, dueling opponents every step of the way with a rich and rewarding tap-and-swipe fighting system that encompasses dodging, blocking, sword fighting and even magic. Going through the castle once is a matter of ten or fifteen minutes, but you won’t be able to beat the Level 50 God King at the end of the castle your first try: you will, by necessity (and as a way of advancing your character), die, and it’ll be up to your offspring to continue the task, each bloodline dying in turn until you defeat the God King, and thereby become him. 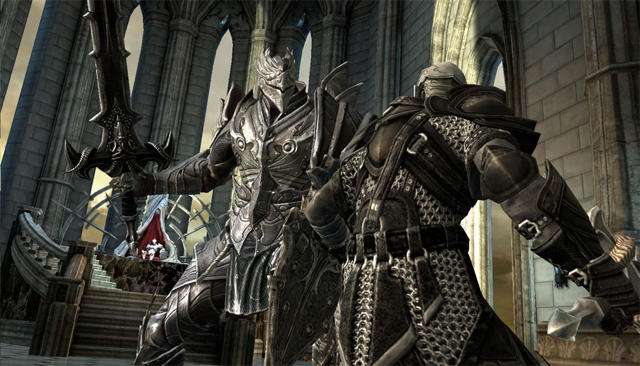 For those who feel that their own sense of progress in a game is inextricably linked to how far they are in the “plot,” this is sure to be as frustrating as the prospect of playing a game of Bejeweled when you were expecting Gears of War, but for those who can let themselves enjoy a game based solely upon the way it amalgams atmosphere with sophisticated mechanics and a state-of-the-art engine, Infinity Blade is endlessly rewarding.

The crux of Infinity Blade’s mechanics is the sword fighting system, which evolves in complexity after each bloodline. Duels are fought by a combination of swiping, tapping and gesturing. Blows are parried by swiping in the direction from which they come a split second before the blow lands… a system which becomes devious later in the game as your enemies begin to misdirect, speed up or even slow down their attacks. Dodging a blow is accomplished by tapping on-screen buttons at the bottom corners of the display; blocking, by holding down a shield button in the middle of the screen. Dodge, block or parry three blows in a row and you get a chance to counter attack, during which time you can confetti your opponent with a chain of slash attacks.

Complicating the sword fighting system somewhat is the ability to use gestural spells on both yourself (Heal, Shield) and against your opponent (Poison, Fire, Ice), as well as the ability to land a powerful break attack that automatically brings your opponent’s guard down. These abilities effectively work as power-ups, filling up over time according to how much damage you’re doing (or how badly you’re getting beaten up).

A more subtle way each duel changes itself up is by being divided into three stages. Since Infinity Blade‘s camera is static, the camera change amounts to a perspective shift, but this isn’t just a cinematic flourish: because you’re now viewing your enemy at a different angle, Infinity Blade is forcing you to reconsider which enemy animation corresponds to which attack. It’s subtle, but after a camera shift it can be much harder to figure out whether or not which direction an enemy is attacking and react accordingly. 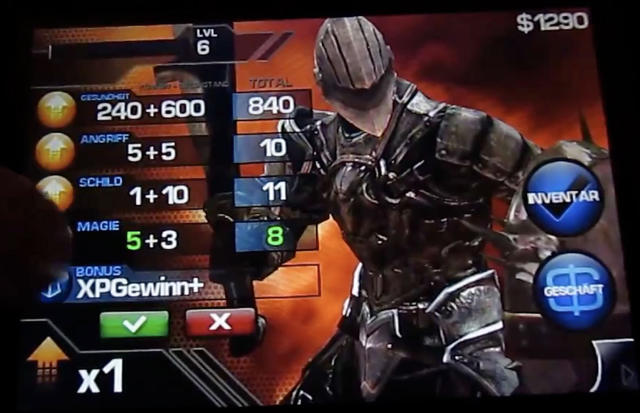 Glommed on top of the sword fighting mechanics is a simplified RPG level-up mechanic, although even this is unorthodox. After each duel, your character is awarded a set amount of experience, part of which goes directly to his level. Every level gained gives your character two status points to assign to either health, attack, magic or shield. All pretty typical so far. Where Infinity Blade gets unique is by then dividing your remaining XP by five and assigning them to your equipment (sword, helm, shield, ring and armor). With every chunk of XP your equipment gains, so do you, but equipment can only absorb so much XP before it becomes “Mastered.” Once a piece of equipment is mastered, it will no longer give your character any XP towards his level, so if you want to keep leveling up in Infinity Blade, you constantly need to be changing out mastered items in your inventory for unmastered items.

It’s a strange system, because it’s perfectly possible that you can save up to buy the best sword in the game, only to have to give it up for a far worse weapon because the best sword in the game isn’t giving you any experience anymore. The way item mastery and leveling-up work in Infinity Blade is probably my biggest complaint because there’s no real incentive to use a mastered item in exchange for giving up your character’s level advancement. If Chair had opted to give a stat boost to mastered item, this feeling of fruitlessness could have been avoided, but as it is, the player quickly realizes to master the game’s crummiest items in sequence before advancing to the truly bad-ass ones.

But that’s a very small criticism of a very big and excellently wrought game, and is something that possibly could be corrected in a patch. It would be nice if the ending you get after you beat the God King was also corrected in a patch, but there’s slimmer chance of that, I think: if Chair or Epic were capable of recognizing how stupid the sudden introduction of one of sci-fi’s most laughable cliches into their otherwise haunting, dream-like game was, they’d never have included it to begin with.

Either way, if you love gaming, it’s hard not to recommend Infinity Blade as worth your $5.99… especially with more items, enemies and environments on the way. Much has been said about the game’s graphics — Steve Jobs himself supposedly exclaimed that he “couldn’t believe this is running on my iPhone,” and you’ll probably shout the same at least once during your first playthrough — but it’s ultimately Infinity Blade‘s phenomenal design, its recognition and embrace of the limitations of the iOS platform, and it’s elegiac, semi-oneiric tenor that makes Chair and Epic’s first proper iOS game such a triumph, not just of the App Store, but across all platforms.