Some early Macbook Air adopters have reported seeing video anomalies and kernel panics on the new 11-inch and 13-inch models of the Macbook Air which may be related to sleep/wake issues.

Additional reports about the video problem have been posted to Apple’s discussion forums and for the people reporting it the symptoms can vary. I’ve even encountered the problem myself on my 13-inch MacBook Air.

The problem with kernel panics has been experienced by Cult of Mac staff that purchased 11-inch or 13-inch models. Users on Apple forums haven’t complained about this specifically yet, but they have been complaining about their new MacBook Airs crashing.

Apple Discussion forum user, DanRyb, basically stated that his 11-inch model would randomly display “weird colors in vertical lines” extending across the entire screen and the machine would freeze. He was forced to power cycle the computer in order to recover.

Another forum user, Hobokendippy, reported that his 13-inch model had crashed three times twice with a blank screen and once with the screen distortion reported by DanRyb.

I’ve also encountered a video problem on my 13-inch MacBook Air. I observed horizontal sparkling bands running up and down the screen, but the computer did not freeze. Subsequently after rebooting the problem hasn’t happened again.

You can see a video of what YouTube user, angrychinesedriver, witnessed  and subsequently recorded on his 11-inch MacBook Air below.

Apple did release a technical bulletin titled: About MacBook Air (Late 2010) Software Update 1.0 which according to Apple provides the following fixes:

MacBook Air (Late 2010) Software Update 1.0 resolves an issue where a MacBook Air (Late 2010) computer may become unresponsive while playing back movie trailers in iMovie. The update also addresses an issue where the computer may become unresponsive after waking from sleep when an external display is connected and also contains general graphics performance updates.

The update will appear automatically in Software Update or you can download it directly. Just for the sake of a sanity check I went ahead and applied the update to my MacBook Air again. I’m anxious to see what happens this week when I start using my new computer as my primary mobile notebook.

I contacted Applecare this morning and they are not aware of any issues regarding these video problems. I cannot recreate the problem and I directed them to the forum containing user comments about the problem. Subsequently, I was given a case number and advised that the call was flagged for Apple Engineering to review.

In addition to this problem, my Editor Leander Kahney, myself, and others have experienced kernel panics on their new MacBook Airs. Leander saw two kernel panics on a 13-inch model and one on an 11-inch model. I’ve experienced one on my 13-inch model that I attributed to my attempting to boot with an SD card built on a MacBook Pro – so I’m sure mine doesn’t count, but his experience is curious. Macs rarely kernel panic and yet he’s seen three of these within four days. All occurred during wake-from-sleep. 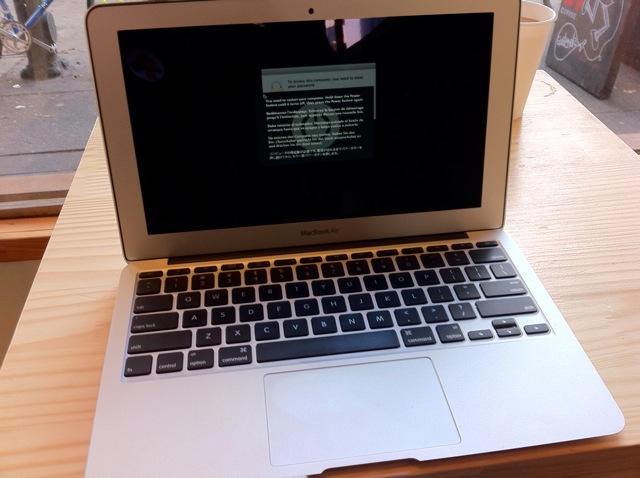 I hate to say this, but my luck with Apple products may have run out. Considering that I’m on my fourth iPhone 4, I had problems getting a Mac Mini repaired, and now I’m on my second MacBook Air (unibody cover on the bottom was warped on the first one) things are not looking so good. However, if Apple continues to fix or replace things I’ll keep plugging along until my patience runs out.

I’ve reached out to Apple PR for comment and I’ll update you if and when they respond.