A quick and reliable LTE connection is a necessity for any iPhone. Verizon and T-Mobile offer the best 4G performance, with AT&T and Sprint not able to keep up.

All four of the national carriers’ networks show improvement over 2017, but some haven’t yet recovered from the deluge of usage that came when they began offering unlimited data plans several years ago.

Although OpenSignal’s most recent State of Mobile Networks: U.S.A. study gave top marks to Verizon and T-Mobile, which carrier you should choose depends on whether you prefer a quick connection or a reliable one.

T-Mobile is fastest 4G in U.S.

T-Mobile offered the best 4G speed in the Northeast, Southeast and Southwest regions of the country, and tied with Verizon in the West and Midwest.

Nationally, T-Mobile customers enjoyed average download speeds of 19.4 Mbps, while Verizon’s averaged 17.7 Mbps. “Verizon is still feeling the hit it took by introducing unlimited data plans over a year ago causing its speeds to temporarily plummet,” according to OpenSignal. “Verizon speeds have recovered to pre-unlimited plan levels, but, over the same period, T-Mobile have increased steadily in our measurements, allowing it to establish a significant lead over Verizon.” 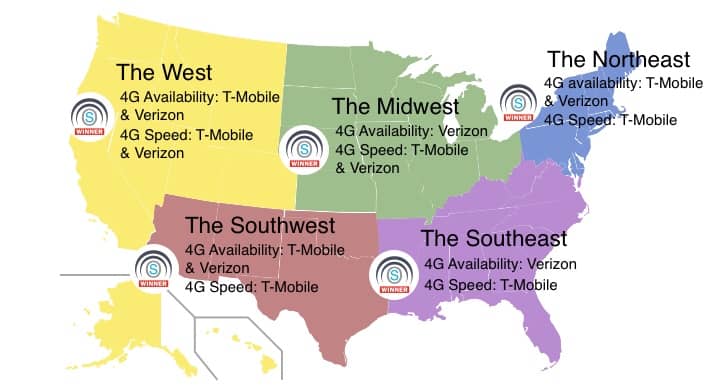 When the average LTE download speeds of all four carriers were averaged together, the result fell below the global average of 16.9 Mbps.

Verizon is most reliable 4G in U.S.

Verizon came out ahead in 4G reliability in the Southeast and Midwest regions, where it had scores of 93.4 percent and 92 percent respectively. Big Red tied with T-Mobile in the remainder of the country.

Neither AT&T nor Sprint came out on top in speed or availability in any part of the United States, which OpenSignal called “an aftereffect of unlimited data plans.” Still, Sprint has improved the availability of its LTE service in all regions.

Even as the carriers are working on LTE, the replacement is already moving closer. AT&T promises to begin rolling out its 5G network before the end of the year, and Intel and Apple are working on 5G chips for future iPhone models.