Lire is an RSS reader for iOS, and it just added a great update in the form of drag-and-drop. Now you can grab any news story and drag it either to Lire’s own drop-shelf (iPhone and iPad), or to another app (iPad). It really makes great use of iOS 11’s drag-and-drop, but is let down by other apps’ poor implementation for receiving dropped items.

RSS is still the best way to keep up with news. An RSS aggregator checks in on your favorite websites periodically, and arranges any new articles, posts or stories into easy-to-browse lists. It’s way better than Twitter because:

So you never miss a story, but neither are you overwhelmed, because it’s easy to select just what you want.

Lire looks fugly (to begin with)

Lire is an iOS RSS reader that connects to services like Newsblur, or Feedly, which keep your feeds’ read status synced across all your devices. Lire isn’t bad. Its design is passable, although the way it lays out articles to actually read is ugly and messy. That’s a shame, because all it has to do is present some text and maybe some images. Looks-wise, Unread is probably the gold standard iOS RSS app, but it’s not very good at handling large amounts of feeds. Out of the box, Lire isn’t pretty, but some futzing with the view options improves things quite a lot.

Lire also lacks a three-pane view, which I prefer. This put the sources on the left, then the lists of articles from the currently selected source, then the article itself. And once you tap an article to read it, it takes up the whole screen, even on a 12-inch iPad Pro, so you lose context from the article list. Reeder, my current RSS reader, does all of this better, but it is also living in abandonware limbo.

Lire’s drag-and-drop functionality is exemplary. You can drag an article, in which case it is shared as a URL to whatever app it’s dropped on. Or you can select and drag text, which can be accepted as plain text, rich text or HTML, depending on how the destination app chooses to handle it. If the dragged text contains images, they also will be carried along for the ride, but they might not always be accepted by the target app (images are included as links in HTML selections, as far as I can tell). 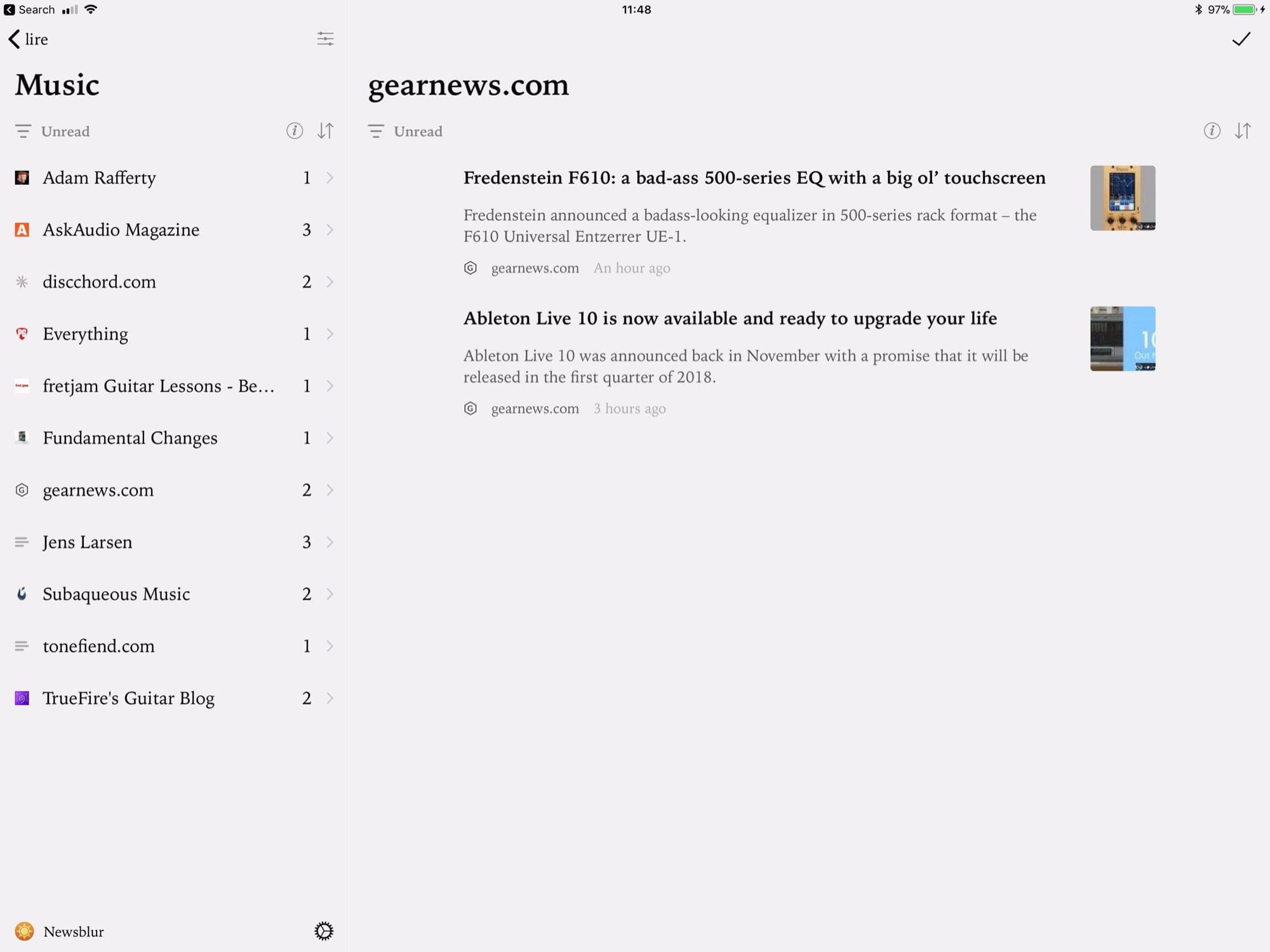 This opens up all kinds of neat workflows, especially on the iPad. You can put Lire and, say, Notes side by side in Split View, and drag snippets and whole articles to save them in a note. Or you can drag an article to your to-do list app of choice. Unfortunately, my to-do list app of choice is Things, and this does play well with dropped URLs. All it does is make a new to-do item with the url as the body of the to-do. It doesn’t add the title into the title field. That means you end up with a list of to-dos that all have no title. That’s as useless as it sounds.

But Lire has another trick. Its drag bar lets you gather articles by dragging them. You can drag one article at a time. Or you can tap more to gather a bunch and drop them together. It’s not a persistent drop-bar. You can’t keep adding stories to a stack in order to act on them later. Instead, when you drop your dragged articles, a sharing menu pops up. It gives you options to star the items, to share them (via the standard iOS share sheet), or to send direct to one of several supported services, like Pinboard, Instapaper, Evernote and so on.

Lire is one of the best RSS readers for iOS, with just the right mix of features and ease-of-use. If you’re coming from Reeder, like me, then you might not like some of the design choices. But Lire is fast. You can force it to look decent. And the drag-and-drop proves a welcome addition, even if it only shares URLs and not rich links for articles.

If nothing else, it’s about a million times better than Twitter.