Apple’s first ever keynote at the Steve Jobs Theater was one for the ages as the company took the wraps off some of its most innovative products ever.

Tim Cook and his crew of executives delivered some exciting new technology today from an iPhone that unlocks just by looking at it, to an Apple Watch that isn’t dependent on an iPhone to make calls and texts. There was a lot to unpack in Apple’s two-hour long keynote, so we’ve broken down the highlights on all the new products.

Here are all the new goodies that came out today:

It’s pronounced “iPhone Ten” and Apple says it’s tomorrow’s smartphone today. Packed with stunning new features like an edge-to-edge Super Retina display, A11 Bionic chip, facial recognition, and wireless charging, iPhone X is hands down the most beautiful iPhone Apple’s ever made. It’s also the most expensive ever.

Fans will have to wait until November to get to try out all the new feature. Apple hyped up new features like the Portrait Mode selfie camera and new Animojis — 3D animated emoji faces that will mimic your facial expressions. The device also comes with UI tweaks now that the home button is gone. Swipe up from the bottom of iPhone X to go to your home screen, or swipe even higher up to go to multitasking view.

The cameras on the back are better than ever too. iPhone X packs a 12-megapixel sensor that’s even larger for better images in low light. Apple also introduced Portrait Lightning, which uses depth maps to perfectly light your subject, giving you different lighting options to choose from.

Getting a taste of the future won’t be cheap though. Pricing on the iPhone X starts at $999 for the 64GB model or $1149 for the 256GB units. Pre-orders start October 27 with units in stores on November 3, so start saving now.

iPhone 8 and iPhone 8 Plus

For iPhone lovers that aren’t comfortable shelling out a cool G on a smartphone, Apple has two cheaper options: the iPhone 8 and iPhone 8 Plus. The design looks similar to the iPhone 7 and iPhone 7 Plus, only with glass on the front and the back and an aluminum band sandwiched in between.

The two new iPhones 8 come with some of the best features from the iPhone X: wireless charging, A11 Bionic chip, improved rear cameras with Portrait Mode and Portrait Lightning. Some Apple fans may even prefer the less-futuristic phones because they still have TouchID and a home button.

This year’s new models only come in three color options: gold, silver and space gray. The iPhone 8 starts at $699 while the iPhone 8 Plus goes for $799 at 64GB. Both devices go on sale September 22. 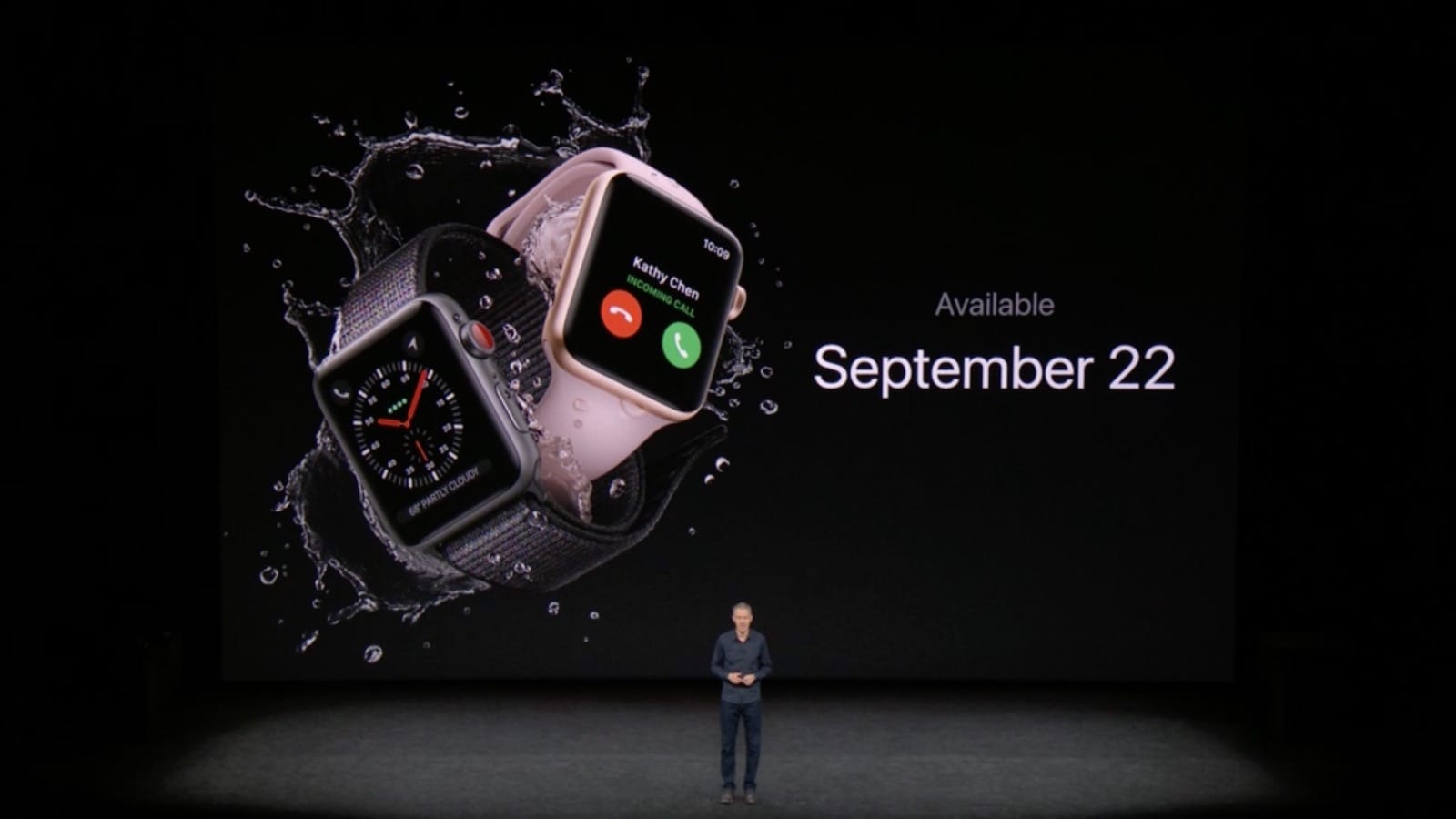 The Apple Watch is finally untethered from the iPhone now that Apple has finally added cellular capabilities to its wearable. You no longer need to carry your iPhone with you to get texts, calls, emails or directions in Maps with the Apple Watch Series 3.

Siri is quicker than ever thanks to a new processor. It can talk too so you don’t have to look at the screen when you ask a question. WiFi is 85% faster and 50% more power efficient. There’s also a barometric altimeter that shows you elevation gain and steps climbed.

Despite all the new tech and improvements, Series 3 is still the same size as Series 2. It comes in a variety of new finishes and bands. And of course, Apple is busting out new color options and bands, including new versions of the Nike+ and Hermes editions.

The cellular version costs $399 while an option without cellular will be available for $329. Series 3 will go on sale in nine countries on September 15 with units shipping on September 22.

By adding 4K support to Apple TV, users won’t just get four times the number of pixels as current HD. Apple’s HDR capable box also allows for richer color and more detailed images. The entire Apple TV interface (including its screensavers) has been reconfigured for 4K, and it supports both industry standard HDR10 and Dolby Vision profiles.

To handle all this awesomeness, the Apple TV 4K packs the same A10X Fusion processor found in the newest iPad Pro, along with 3GB of RAM. This is an upgrade on the A8 chip and 2 GB RAM found in the previous Apple TV. It allows for 4K content to be played at 60 fps — thereby helping make the Apple TV 4K a better gaming machine.

The latest Apple TV will be available on September 22, priced at $179 with 32GB of internal storage or $199 with 64GB. Preorders will open on September 15.

Apple’s completely embracing the wireless future and bringing new perks to its wireless headphones too. The company didn’t completely redesign the AirPods but it surprised us with a simple update to the case that now allows users to charge it wirelessly. The wireless charging case is “optional” but Apple didn’t give any details on price or when it will be available or included with new AirPod orders, so you might want to hold off on buying yours for a bit.

One of the biggest surprises of today’s keynote was the announcement of Apple’s very own wireless charging pad. We knew Apple was working on such a device, but the features are pretty incredible. Unlike other wireless charging solutions, AirPower can charge your iPhone X, Apple Watch Series 3 and AirPods all on the same spot.

Apple didn’t divulge any pricing info on the matt yet or a solid release date. All we know so far is it’s sexy and won’t be available until next year.