The wait is finally over. Apple has conspicuously ignored consumer demands for third-party application multitasking over the last three years, but now anyone with an iPhone 3GS or 3G iPod touch can now freely switch between apps without missing a beat. In many ways, today’s launch of iOS 4 is Apple’s most anticipated software release in almost two years. Not since the opening of the App Store via iPhone OS 2.0 has the company made such drastic changes to its flagship product line.

Having installed and played with iOS 4 on my 3GS a bit more than two weeks ago, I can say with confidence that it doesn’t disappoint — but it does take some getting used to.

The differences between iOS 4 and all prior iPhone experiences are pronounced, if  the platforms are similar from a visual standpoint. In fact, the new firmware is so different from iPhone OS 3.1 that it can take some getting used to at the outset. Gone is the ability to quickly summon a user-selected function by double-pressing the home button. This instead brings up a scrollable 1×4 grid containing every app that has been opened since the iPhone was last powered up, while the currently active app rises off screen to reveal it. 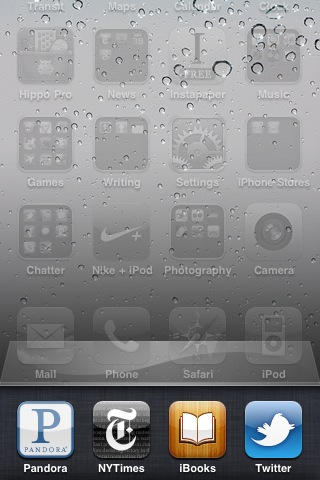 It’s a simple but very powerful interaction, finally making it non-irritating to drop out of an app you’re running, reply to a text, and pick up where you’ve left off. If you’re a heavy user of five or six key applications for mobile writing and the like, it could literally make you more productive. It’s not actual multitasking, as background apps don’t continue to update (with a few exceptions), but the difference is incredibly hard to detect in most cases. Selecting a different app from the launcher triggers a rotating screen animation, and, in many cases, the relaunch process is complete by the time it finishes. The NY Times app is already up-to-date, and switching between it and other first-party apps is absolutely seamless. I pretty much love everything about it. The experience isn’t just good, it’s great and will get better as more iOS 4-compliant apps ship.

(For apps that haven’t yet been recompiled specifically for iOS 4, this feature’s utility is significantly muted, as it simply relaunches your chosen program. A few older iPhone apps, like Twitter for iPhone and Facebook, use so-called persistence features to simulate multitasking, so the effect is similar, if much slower than with optimized apps).

Not everything is perfect with the multitasking interface, however. Since it makes an effort to keep track of every single application that you own, it’s relatively simple to switch between a bunch of apps and then find out that Mail or Safari has been kicked over to the fifth or sixth pane of “currently running” apps. It’s a hard line to walk, but it would be nice if it only kept track of your most recent eight or 12 apps instead of having no cap. There’s just something fundamentally ridiculous about scrolling through your 43 most recently used apps — the current total in my switcher. Apple gives you the option of pressing and holding down on their icons to trigger a delete badge to remove them from the switcher, but it’s honestly even more confusing.

The other major aspect of multitasking beyond the fast app switching API is a small set of background tasks that Apple permits:

Unfortunately, very few of these features are implemented in any current apps, as Apple didn’t allow developers to submit iOS 4 applications until after the WWDC keynote, which means there’s a huge number of key programs still pending review, including Skype, Last.FM, Twitter for iPhone, NPR and many others. Popular music streaming app Pandora is already out, and the multitasking features work great. When you switch to another program, it keeps playing music, almost exactly like the iPod app does. 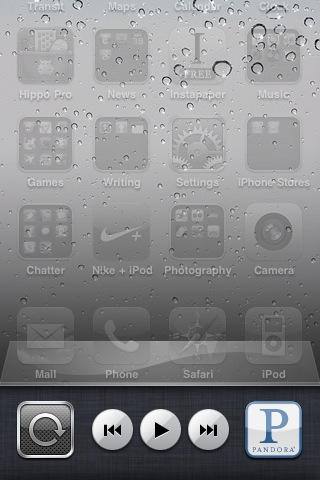 When you double-press to invoke app switching, you can also swipe left to access controls for the currently active audio player, whether iPod or otherwise. It’s a really nice addition and is completely elegant in its implementation. The icon at far left is screen orientation lock, which, for some reason, only allows you to lock in portrait mode. It’s unclear why this is the case, but screen lock has been a long time in coming, so I like it. As for Pandora itself, the current version has some stability issues, in my experience. After about 20 tries, it still never managed to successfully load one of my saved stations, and in one case it loaded an ad that it never dismissed, even after ten minutes. But it’s a good start, and it’s only a matter of time before other music streaming apps become as useful as the iPod app always was.

All told, multitasking, as the signature feature of iOS 4, is a great addition to the platform. The good news is that it will improve over time as more apps implement Apple’s new APIs — it’s just a shame that the slow uptake on some apps won’t allow iOS 4 to put its best foot forward at launch. I don’t have a lot of complaints about a lack of “true” multitasking, by any means. The only exceptions I can think of outside the Apple background services that I would like to see is updating Twitter and RSS apps, and neither one seems like a significant omission. And the battery life improvement over true multitasking is significant. I haven’t seen any reduction in actual uptime since switching from 3.1 to 4.0, which is fairly astounding. It’s a major success, all told.

Folders Are a Blessing and a Curse, Visual Upgrades Superficial, Mail Improvements Fantastic

Though Apple claims 11 other major features in iOS 4 outside multitasking, it’s really not true. There’s really only one major new feature at an OS level — the rest are minor app improvements like digital zoom in Camera and Faces and Places support in Photos. But that feature, Folders, is a big change. For the first time, Apple allows you to nest as many as 12 apps together into a single icon that expands when you press it. The space savings alone can be staggering. I consolidated from eight screens to two in my first day of use, and I still have 21 apps that aren’t currently in folders. 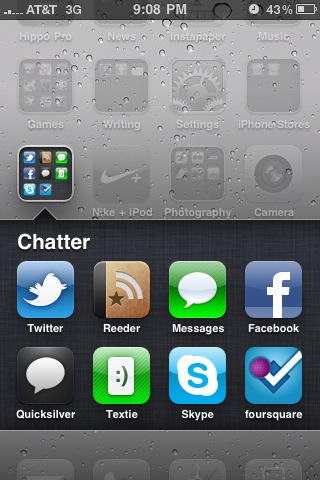 Folders work wonderfully, all told. To create them, simply hold down the Home button and then drag one jiggling icon onto another to generate a new folder, which will automatically get named after whichever category Apple believes suits them both. If you don’t like the name, it’s easy to customize. On an iPhone 3GS, at least, the icons are small enough that they’re hard to make out, but they are legible — and I would expect much more so on the iPhone 4’s Retina Display. But Folders does have one very obnoxious habit that I hope Apple fixes next time out. If you launch an app from within a folder, when you return to the Home screen, that folder, not the normal Springboard launcher, will still be open. If you want to launch an app not contained in that folder, it’s a needless button press to get back to it. It was going to be a trade-off to default to the Springboard, also, but I think it would have been a better choice. We’ll see how long it sticks around.

The iPhone also gets a mild visual upgrade, largely lifted directly from the iPad, including a 3-D shelf for the bottom of the Springboard, drop shadows from icons, and user-customizable wallpaper. It all looks nice, but it doesn’t add any new functionality, and the gloss can actually make it tougher to spot what you’re looking for out of the gate. I tend to be a fan of minimalism, so I can’t say I find much to admire in all of this.

Last, but not least, iOS 4 brings with it a few much-requested features for Mail — namely, unified inbox support, message threading, and multiple Exchange accounts. They all work just as advertised and are reason enough to upgrade if you’ve got a large number of push e-mail accounts to manage.

3GS Owners, What Are You Waiting For?

Without hesitation, I can recommend that anyone with an iPhone 3GS upgrade to iOS 4. The new features are substantial and improve what was already the best smartphone platform into something better. Incredibly, performance is slightly faster than under 3.1. I’ve noticed much less sluggishness when scrolling through long lists, and it almost feels like a new phone. Apple has hit it out of the park. I would not, however, upgrade if you’re an iPhone 3G or early iPod touch user. From many accounts, performance gets noticeably worse on the older hardware, and most of the new features aren’t supported, either.

At the same time, I can’t help but think that many of the new features seem in some way to have been driven by the success of Android, including multitasking and unified inbox. Apple is, on some level, playing defense, a rarity for the company. The only way for it to stay ahead is to define its own vision for where the experience needs to go. This is a very welcome evolution. Before all that long, though, Apple needs to think about how to make the next revolution happen.