Apple fans felt a deep sense of mourning in 2011 when Apple founder Steve Jobs succumbed to cancer. With the fifth anniversary of his passing approaching, Cult of Mac looks at the artistic tributes that followed.

If the wrinkles and curves on a person’s face tell a story, Dylan Roscover will find the right words to narrate each and every line.

The commercial artist from Boulder, Colo., used the messaging from Apple’s “Here’s to the crazy ones” television commercial from 1997 to create a portrait of the embodiment of misfit genius, Steve Jobs.

Jobs died after battling cancer in 2011 and artists around the world, from painters and sculptures to the writers of opera and cinema, were moved to use their own rebel talents to pay tribute to the Apple founder.

But Apple was on Roscover’s psyche long before Jobs passing and in 2009, the self-described Mac fanboy created a picture of Jobs using typeface and fonts familiar to Apple’s legion of fans and users.


Even Jobs’ whiskers were comprised of lots of Adobe Garmond lowercase “L’s.” The sentences from the crazy ones campaign are hand-kerned by Roscover and follow the contours in Jobs’ face in different point sizes, but certain words were meant to stand out, like misfits, rebels and troublemakers.

Traveling down the length of his nose is his name, Steven Paul Jobs.

“The Steve Jobs piece was meaningful to me,” says Roscover, whose commercial and editorial clients include Adobe, The Jackson Laboratory, and Time and Stern magazines. “I loved the campaign to begin with, and Apple is rewriting the way the world works. Folks like Steve Jobs just had a drive that was crazy with an insane attention to detail and an obsession to get something right.”

Roscover could have easily been talking about himself and the typeface portraits he creates.

He has lost count of the number of pieces he has done working with type, but he believes it is between 50 and 100. Each one can take two or more weeks to complete, from the research to understand the subject to the finished piece, created with a combination of Adobe Illustrator and Photoshop.

Roscover, who was in art and design school in Florida when he created the Jobs piece, explained each step in a 2010 interview with editor and publisher Leander Kahney for Cult of Mac.

He said he spent most of three days without eating or sleeping to perfectly place each word on the face of Jobs.

“It’s about finding the right fit,” Roscover says. “It’s like pairing wine with meals. You’re trying to find tastes that work with other tastes.

“The work is really challenging, but when you get it right it is fun to look at.”

Apple’s “Think different” ad campaign included a commercial showing black and white footage of some the most innovative thinkers of the 20th century. One version was narrated by Steve Jobs and included this quote:

“Here’s to the crazy ones, the misfits, the rebels, the troublemakers, the round pegs in the square holes… the ones who see things differently –- they’re not fond of rules… You can quote them, disagree with them, glorify or vilify them, but the only thing you can’t do is ignore them because they change things … they push the human race forward, and while some may see them as the crazy ones, we see genius, because the ones who are crazy enough to think that they can change the world, are the ones who do.”

Two of Roscover’s highest-profile pieces were a portrait of Venus de Milo for Adobe called The Birth of Type as well as typeface illustrations of President Barack Obama on two separate occasions, one of which was a cover image. 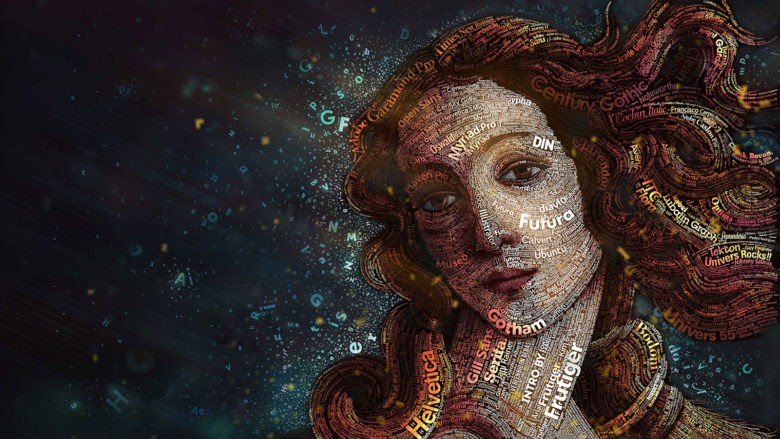 Roscover, who once asked his barber to shave Apple’s logo into his hair, did not copyright the Jobs image and felt like it was a piece he wanted to share with the world.

Not long after, the writer of the Think different campaign, contacted Roscover to say how much he liked the Jobs typeface portrait. He told him he passed it along to the man himself, and the thought of Jobs seeing it was reward enough for Roscover.