Donald Trump has threaten to permanently switch to Samsung if Apple doesn’t give in to the federal government’s demands, and he’s calling on all his followers to do the same.

At a rally in South Carolina this morning the US presidential candidate says that citizens should boycott Apple products until the company hands over the PIN to one of the San Bernardino terrorist’s iPhone 5c. Trump neglected to mention though that nearly all his tweets come from an iPhone.

Trump switched to Android device when he tweeted his call for a boycott, but just 40 minutes earlier he used an iPhone to tweet a video link showcasing how incredibly great the buildings are he creates.

“First of all, Apple ought to give the security for that phone,” Trump told his followers at the event today. “What I think you outta do is boycott Apple until such time as they give that security number. Boycott Apple.” 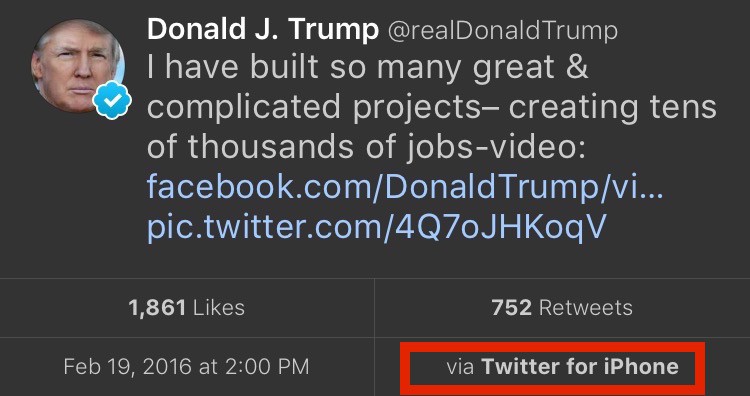 The Donald was the first candidate in the 2016 race to chastise Apple for its refusal to unlock terrorist Syed Rizwan Farook, after Tim Cook posted a public letter saying such an act would create a backdoor into the iPhone that could be exploited by good guys and bad guys alike.

“The phone isn’t even owned by this young thug that killed all these people. The phone is owned by the government. It’s not even his phone, we don’t even have to go that far. But Tim Cook is looking to do a big number, probably to show how liberal he is. Apple should get the security or find other people.”

Watch Trump’s full rant against Apple and Tim Cook in the video below: