In Part 4 of Macworld founder David Bunnell’s memoirs about the Mac, Steve Jobs tells a publishing mogul to “belly up to the bar” and hangs up on him. 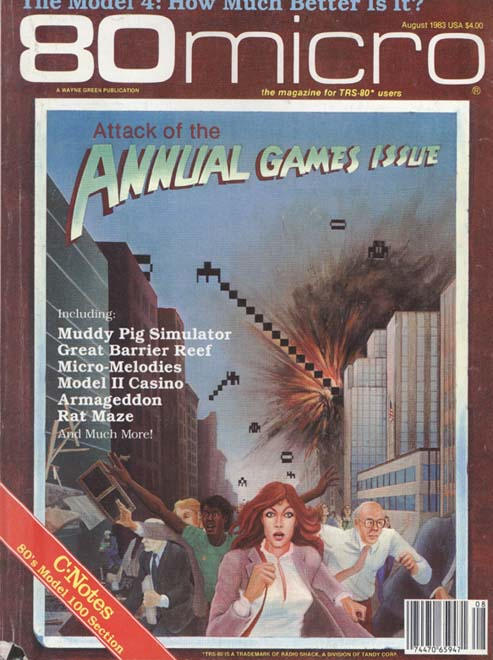 Meeting with Steve Jobs a second time in less than a week might give me a stroke, I worried. But it was Pat McGovern, not Jobs, who nearly short-circuited my promising magazine career.

Monday morning came and as I was eating breakfast and reading the San Francisco Chronicle, I suddenly gagged. Partially chewed bagel bits flew across the room as I read Uncle Pat has just spent $16 million to purchase Wayne Green’s New Hampshire based computer magazine company. $16 million! It was simply not believable.

Green was a pioneer in our field but his handful of magazines had tacky names like inCider, Hot CoCo, and 80micro. Aimed at diehard computer enthusiasts, they were homemade looking, poorly written and their circulations were tiny.

McGovern had carefully crafted an his image to be extremely frugal, if he could save $200 by stopping over in Kansas City instead of taking a direct flight from Boston to San Francisco, he did so, and he did this often, always flying coach. His total investment in my company, PC World Communications, was less than $2 million and that was a loan—we had to pay it back out of future profits.

Why McGovern would want Wayne Green’s magazines and why he would pay so much for them made no sense to me.

As I zoomed down highway 280 to Cupertino I prayed to the computer gods Steve Jobs was too wrapped up in the Mac to read the San Francisco newspaper.

The handicap parking space in front of the Pirate Building was unoccupied. I had some time to collect myself before Steve arrived. But then Mike Murray greeted me in the lobby with: “Wow Dave, did you know your boss paid $16 million for Wayne Green’s company?”

“Well,” I speculated, “He probably isn’t really paying $16 million—Uncle Pat is really clever, so it’s probably some long term pay-out based on goals Wayne Green could never reach in his wettest dreams.”

Then Steve walked in. I couldn’t help but notice he was wearing the hippest leather jacket I had every seen. It had a certain outlaw quality, like the one Marlon Brando wore in “The Wild Bunch,” yet it must have made of some very high quality lambskin because when he took it off I could tell it was light as a feather.

For the first time, I realized Steve didn’t really care to have a lot of possessions, but the ones he had had to very special. At least he smiled at me and even said “hello.” For a moment, I thought he really didn’t know about McGovern and Wayne Green, or if he did, he didn’t care.

Of course, the truth was he was thoroughly outraged, but relishing the coming moment when he could verbally squish me like an annoying cockroach.

“So,” Jobs began, “McGovern wants you to beg us for money to publish Macworld, and yet he has all this extra cash to throw around for Wayne Green’s crap.”

“Steve, I honestly don’t know anything about this. I read it in this morning’s paper, just like you and Mike. Maybe you should talk to McGovern.”

Watching Steve dial the number I gave him, I could feel my heart pounding as I hoped to hell Uncle Pat was high in the sky somewhere over the Pacific on his way to some country like Cambodia where telephone reception wasn’t so good. Unlikely as might seem, though, McGovern was once again at his desk.

“You must be a lousy businessman,” Jobs began, “You paid $16 million for Wayne Green’s magazines and yet you want me to pay you to have David and Andrew produce a magazine for Apple.”

I couldn’t hear everything McGovern said but he was talking loudly enough in an excited voice that I did hear, “don’t believe everything you read in the Chronicle.”

“You’re investing in Micro80 but not Macworld!” Steve shouted back, “Micro80 looks like yesterdays leftover oatmeal. If you want to publish Macworld you need to belly up to the bar!”

And then he hung up. I was dumbfounded.

“Don’t worry, David,” Jobs laughed, “McGovern will come around and we’ll still have a magazine.”

This was, I suppose, just another aspect of the famous “reality distortion field” that people to this day say Steve lives in. One day you walk on water and the next day you’re dog shit. McGovern had a healthy ego and I worried he wouldn’t put up with kinds of treatment. The deal would never get done, even if Apple agreed to buy the warranty cards.

“Steve, let me explain something,” I pleaded, “In spite of what McGovern told you, we are already investing in Macworld. I’ve hired writers, commissioned art, taken people off PC World, and I have the world’s great magazine designer on board. McGovern doesn’t really want to stop me, the horse is already out of the barn.”

Leaving the warranty issue aside, we went over the rest of the draft agreement. Steve and Mike said they wanted to see a “blueline” version of Macworld before it went out to the printer. They assured me they wouldn’t insist upon changing the copy in anyway and in fact, they said they wanted Macworld to have an independent voice. This one-time review would not apply to subsequent issue. “You can be critical of us,” Jobs said.

I told them I’d take up this issue with Andrew and get back to them.

“Concerning Andrew,” Steve continued, “if he dies we want the right to choose the next Macworld editor.”

I was flabbergasted. “That’s outrageous, Steve, no publishing company could ever agree to something like this.”

“How do we know if Andrew dies you won’t have Wayne Green edit Macworld?” Steve asked.

I told Steve we would agree that Macworld would always maintain the highest standard of editing and design but there was simply no way ever that we could agree to let Apple chose the editor, no matter what the circumstances.

“We can’t agree to this and maintain our journalist integrity” I said, and somehow that seemed to stick.

As shocking as this encounter was, I came back to San Francisco with everything I needed to get the project going. There was a pre-release version of the Macintosh in my trunk, a promise that we would get four more, and amazingly, Steve agreed to give me and Andrew access to the Macintosh Development building.

We could come and go as we please and we could talk to anyone. “Day and night,” he said. For our part, we agreed to keep our magazine project entirely secret, except for the people who directly worked on it. We would be under nondisclosure until the announcement day.