While Apple’s long been criticized as a hiring mostly white males, the company has made some big improvements in the last year, hiring its largest-ever group of employees from underrepresented groups.

More than 11,000 women were hired by Apple last year, marking a 65 percent increase over the previous year, according to information on Apple’s Inclusion and Diversity page, which was updated today. The page shows the company’s latest numbers on the percentage of employees it’s hired based on ethnicity and gender.

In the United States, Apple has increased its hiring of black and Hispanic employees by 50 percent and 66 percent over the last year. In an open letter according the Apple diversity report, CEO Tim Cook says the company spent more than $650 million on women- and minority-owned businesses last year; however, the company recognizes it still has room for improvement.

“Some people will read this page and see our progress. Others will recognize how much farther we have to go. We see both,” writes Cook. “And more important than these statistics, we see tens of thousands of Apple employees all over the world, speaking dozens of languages, working together. We celebrate their differences and the many benefits we and our customers enjoy as a result.” 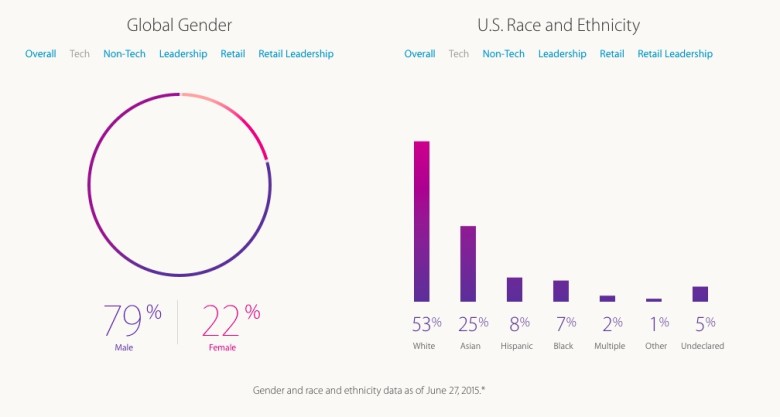 Apple says 2015 has been its most diverse hiring year ever. The company’s global gender split is now 69 percent male and 31 percent female, which is a marginal improvement over last year’s 70-30 split.