“What color is this stupid dress?”

That’s the question I (as well as most of the Internet) asked friends tonight at the local bar, after a picture of an ugly … errr … black and blue bridesmaid’s dress swept the Internet late Thursday night.

An impassioned fight broke out between my buddy, the bartender and myself. “It’s gold and white!” they said emphatically.

“Are you blind?! It’s clearly navy and black,” I burst out, baffled, between bits of burrito and brew. I called the waitress over to win her over to my side, but surprise, she says, “It’s like, kind of copper and gray.”

Nearly 75 percent of people surveyed see the dress pictured above as gold and white, according to Buzzfeed. In reality, it’s navy and black.

The Internet completely blew its mind trying to explain why some people saw the #Dressgate dress in different colors. Experts are still struggling to come to a scientific consensus as to why you might see the fabric in a completely different color scheme than your friend. I feel like I’m going insane because it’s definitely blue and black, but most won’t agree.

To make it clearer, here’s the image with different color balances to show what others see: 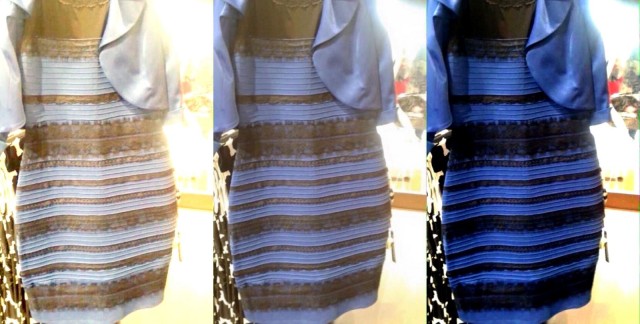 The dress was initially posted by 21-year-old singer Caitlin McNeil, who lives on the tiny Scottish island of Colonsay. McNeil asked friends on Tumblr to clarify what color the dress is because she and her friends are freaking out. It took a few weeks before the debate reached critical viral mass Thursday.

Debates over the dress’s correct color raged on Twitter. News organizations have been quick to bring out the experts to explain just what the hell is going on. The only problem is scientists still don’t really know why the hell this picture looks different to so many people.

Nearly every major website dragged an expert out of the late-night bullpen to provide some insight to the phenomenon.

Vice’s expert: “Why is this happening? I don’t know,” said Jay Neitz, who’s been working in the field of color vision for about 35 years. “This is one of the most fascinating color vision things I’ve seen in a long time. The lens of your eye changes throughout your lifespan, and you’re less sensitive to blue light when you’re older.” That might explain why Neitz saw white and his students saw blue.

Mashable’s expert: “It is yellow and gold in this lighting,” said Dr Robert Freedman of Swampscott, Mass. “Scientifically it has to do with the lighting and reflectivity of the material.”

“So does that mean you’re special if you see it in black and blue” my friend asked me sarcastically, after we had brought over a fourth person that confirmed, “Yeah, it’s definitely white and gold.”

Science will probably solve the mystery of the multicolored dress soon. Until then, my reply is, “I dunno, but yes.” It’s 1 a.m. Time to tap out.

Llamas are on the loose. America is pushing into a new war. The Federal Communications Commission has finally made net neutrality a reality. And the biggest black hole ever has been found, but who cares?

Sometime it’s great to just forget about it all and fight over something like, “What color is this stupid dress?”