Things couldn’t be going better for Apple on the iPhone front. The company just posted the most profitable quarter ever in the history of corporations thanks to strong iPhone sales. And according to the latest report from Cannacord, Apple is basically the only company in the world making money off smartphones.

Apple accounted for 93% of smartphone profits in Q4 2014 reports Canaccord Genuity’s Mike Walkley who has also raised his target price on AAPL shares up to $145. That’s bad news for LG, Samsung, HTC and anyone else that makes smartphones, and to make it even worse, Cannacord estimates one third of all smartphone users will own an iPhone by the end of 2018.

See the full breakdown of profits per company below: 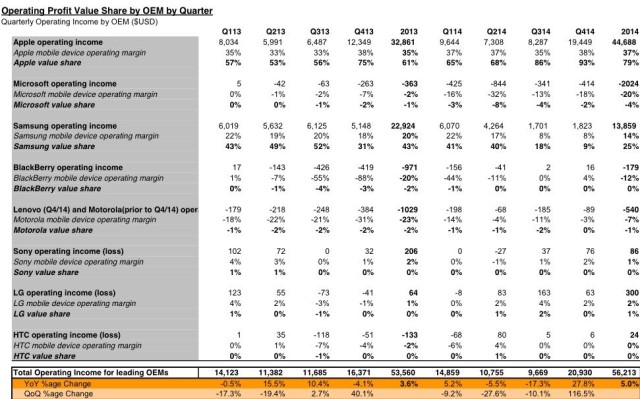 Walkley agrees with Tim Cook’s assessment that the iPhone 6 still has legs. According to his estimates, only 15% of the 404M iPhone users worldwide have upgraded to the new device. Now that Apple’s added a bigger screen, Apple should continue to eat away at high-tier Android smartphones’ marketshare.

Samsung was the only other company to make money off smartphone sales, while all other companies are operating at no profit or at a negative margin. Cannacord predicts Apple will increase its install base 20% year-over-year in 2015 to finish with a total of 487 million subscribers. By 2018 that number is expected to his 650 million, or roughly one-third of the projected 1.8 billion global premium smartphone subscribers.