Apple surprised developers with its new programming language, Swift, at WWDC 2014 but it hasn’t taken long for the developer community to get behind what will soon be the replacement for Objective-C.

In the latest programming language popularity rankings from RedMonk, Swift has shot up from the 68th ranked language in Q3 2014, to the 22nd most popular language going into 2015. To put that growth into perspective, Google released its new language Go in 2009, but it just barely cracked the top 20 in this quarter’s rankings. 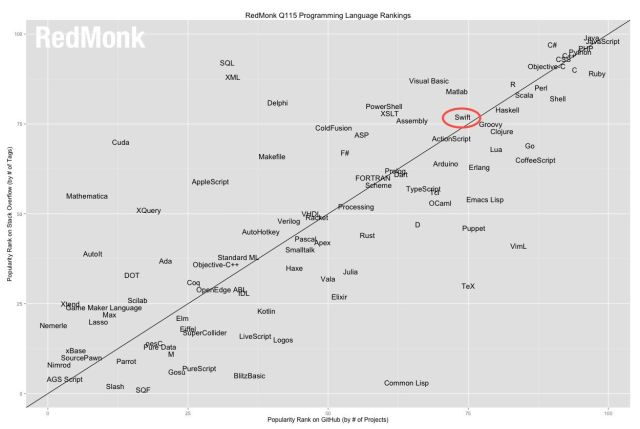 RedMonk notes that the growth Swift is experiencing is unprecedented in the history of their rankings. When most languages experience dramatic growth they typically jump between 5 to 10 spots, and the closer you are to the Top 20, the more difficult it is to rise up a few spots.

“Swift has gone from our 68th ranked language during Q3 to number 22 this quarter, a jump of 46 spots. From its position far down on the board, Swift now finds itself one spot behind Coffeescript and just ahead of Lua. As the plot suggests, Swift’s growth is more obvious on StackOverflow than GitHub, where the most active Swift repositories are either educational or infrastructure in nature, but even so the growth has been remarkable. Given this dramatic ascension, it seems reasonable to expect that the Q3 rankings this year will see Swift as a Top 20 language.”

Keep in mind that these rankings are not representative of general usage, but are more or less an examination of correlation in popularity on GitHub and StackOverflow (two of the most popular dev sites on the web). This doesn’t mean Swift is the 22nd most used language, but the charts can be used to predict future use and popularity.

Swift still has a long climb ahead to replace Objective-C, which currently sits at #10 on the rankings. The rest of the top 10 includes, JavaScript, Java, PHP, Python, C#, C++, Ruby, CSS, and C.