Developers embrace future of Apple Watch apps with WatchKit
Cult of Mac Mobile menu toggle
Mobile menu toggle
FULLSCREEN
A concept design of interactive notifications on Wunderlist for Apple Watch. Photo: Wunderlist
There are two kinds of notification views apps can use. The second "long look" expands to show more information. Photo: Wunderlist
What the Hours time tracking app will look like on Apple Watch. "We are still working on the UI for when you tap the timer but it will essentially expand that particular timer yet keep the others still visible." Photo: Jeremy Olson 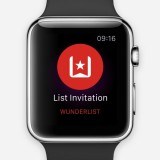 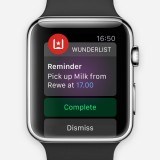 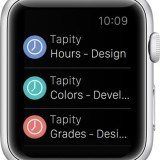 Despite never having laid their hands upon an Apple Watch, developers are feverishly crafting apps for the long-awaited wearable.

To do this, they face considerable challenges: The size of the device is unlike anything most of them have ever contemplated, and they must design for an entirely different kind of user experience. To make matters worse, the Apple Watch’s functionality will be severely limited, at least at first.

Still, the independent developers that Cult of Mac spoke with are unabashedly delighted to take on the design challenge as they seek to colonize the next frontier of computing: your wrist.

“There’s this natural extension of the device experience people have been itching for, and I think this is that next step,” says David Chartier of AgileBits, the Canadian company behind 1Password, in an interview with Cult of Mac.

It seems obvious that Apple would want to bring its $20 billion-plus app ecosystem to the Watch, but the speed at which WatchKit was made available contrasts starkly with the history of iOS. The original iPhone was on sale for nine months before Apple officially gave third-party developers the ability to make apps on the platform.

This time around, the clock is ticking much faster. If Apple sticks to its current release timeline, developers now have about six months to get their apps ready. It’s clear that Apple sees third-party apps as vital to the Watch’s success, and devs see the new product category as a huge opportunity.

Many developers have already begun working on their designs using WatchKit, the collection of development tools Apple released last month. AgileBits, for instance, is already working on ideas to bring 1Password to the Apple Watch. Chartier notes that the app could benefit from having sensitive data, like logins or a Social Security number, readily available on the wrist.

“Wearables, and especially the Apple Watch, are a wonderfully natural expansion of Wunderlist and our vision of keeping people’s life in sync,” says Lehnert. “It will feel like a friend that is kindly reminding you of the project presentation you wanted to finish for the upcoming meeting. Or you will get reminded of bringing the groceries that your partner added while walking past a supermarket. And in case you want to quickly add a to-do or save a thought for later, just dictate it through the Apple Watch and Wunderlist will remind you later.”

Apple has said that full-blown, native Watch apps won’t be possible until sometime next year, and apps are currently so restricted that it’s hard to call them “apps” at all. They will instead function like extensions of iPhone apps. Most of the Apple Watch’s marquee features, including heart rate monitoring and NFC, are off-limits.

Regardless of the limitations, the overwhelming consensus among app makers that Cult of Mac spoke with is that WatchKit allows for more functionality than expected at launch, specifically because apps can do more than just push notifications.

“What they’ve provided in terms of WatchKit is really rich,” says Michael Simmons, co-founder of Flexibits and creator of calendar app Fantastical. “It’s nice to have a new product coming that you can actually design for without having to guesstimate.”

Flexibits is looking forward to bringing Fantastical to the Apple Watch, but Simmons admits there will have to be a legitimate need for porting the product. “If we can’t make Fantastical for Apple Watch better than Apple’s own Calendar app, we won’t do it,” he says.

Developers are also dealing with limitations imposed upon them by Apple. The documentation Apple provided with WatchKit paints a clear picture of how Apple intends Watch apps to be used — and the strict limits that will be placed upon the wearable apps.

The restrictions might seem familiar to veteran coders: Apple only let developers make Web apps for the iPhone at first, a situation John Gruber of Daring Fireball famously summed up as a “shit sandwich.” For the first generation of Apple Watch devs, it’s like 2007 all over again.

“A Watch app complements your iOS app; it does not replace it.”

Watch apps run as extensions of their iOS counterparts, and a paired iPhone is needed to install and run anything on the wrist. If the iPhone isn’t within Bluetooth pairing distance, an iOS app’s Watch counterpart simply won’t function. Unless you have an iPhone to pair it with, owning an Apple Watch won’t be that pleasant of an experience.

Relying solely on the iPhone’s processing power is likely intended to preserve the Watch’s battery life and resources, but the restriction comes at a cost.

Because native Watch apps aren’t possible yet, developers can’t create custom animations for their apps. Everything is image-based, which prohibits the implementation of video and most game ideas.

Yet those entrenched in the app community see Apple’s stringent guidelines in WatchKit as a good thing because the framework will force developers to create simple, consistent and helpful experiences for users.

“In a sense it’s very classic Apple,” said Werner Jainek, the CEO of Cultured Code and maker of Things, Apple’s most-recent free app of the week. Werner belongs to the school of thought that structure helps spark creativity, and for Things, he thinks Cultured Code “can create an experience that is really great” on the Watch.

The current version of WatchKit is “more than enough to build pretty sophisticated apps,” according to independent developer David Smith, maker of RSS app Feed Wrangler. Even though he suspects “you’re probably not going to sit down and read articles in long form on your wrist,” he thinks the wearable could be great for browsing headlines and saving them for later, or even using Handoff to start reading something on the Watch and then picking it up later on an iPhone or Mac.

Jeremy Olson of Apple Design Award-winning studio Tapity fully expects the Apple Watch to change the way people use his time-tracking app Hours. Wearables truly shine for activities that require frequent access, and Olson and the rest of the Tapity team have already started making a version of Hours for the Watch. Until they can get their hands on an actual device, actual-size printouts of the Watch’s dimensions are their best bet.

Whether Apple chooses to eventually offer a dedicated App Store for the Watch or not, third-party apps will be plentiful. Expect a lot of your favorite apps to be updated with Apple Watch support next year. Once native apps are possible, all kinds of new opportunities will be possible for developers.

Michael Simmons sees the Apple Watch as a platform for apps that will mature over time. “Right now,” he says, “we’re only skimming the surface.”