“Toy Story 3” director Lee Unkrich gave something for his seat mate to gawk at as he sat at 36,000 feet editing the latest animated tale of plaything adventures.

With not a second to waste — the release date is June 18, 2010 —  Unkrich worked on a MacBook Pro, with what looks like shortcut color codes for Avid Media Composer.  (Crane as I might, all I ever see are Excel spreadsheets. Need to get upgraded from Economy more often, perhaps.)

Apple products often feature in Pixar movies (perhaps in a nod to history?), the trailer for Toy Story 3 already has a nice bit of iProduct placement. 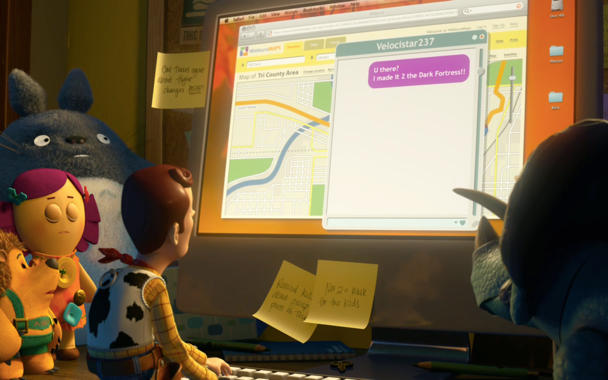 In the third installment of the “Toy Story” saga, owner Andy heads off to college and his parents clear space by packing Woody, Buzz and the gang off to a daycare center. New characters include Triceratops (voiced by “Flight of the Conchords” groupie Kristen Schaal ) whose iMac chat with a dinosaur down the street gets spied on by Woody  in this scene from the trailer.